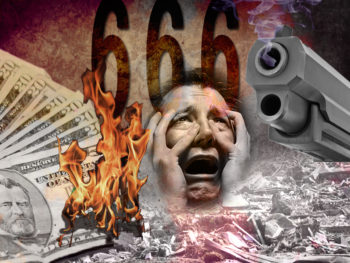 Refuting Walid Shoebat’s definition of the Mark of the Beast!

Don’t be surprised that we’re living in the era when the prophesied mark of the beast will appear. Therefore it’s prudent to fully understand what this mark is and what it isn’t, so we can be prepared.

In fact, it is not even presumptuous to believe that the antichrist is alive today on the earth, awaiting the time when he will impose this mark on mankind.

The call for a one-world government, the hostility against Christianity, the rise of lawlessness are but trends that will continue to propel the world to the climatic confrontation with the antichrist.

Now what does the scripture specifically say about how the Antichrist will impose this mark?

(16)  And he causeth all, both small and great, rich and poor, free and bond, to receive a mark in their right hand, or in their foreheads:

(17)  And that no man might buy or sell, save he that had the mark, or the name of the beast, or the number of his name.

(18)  Here is wisdom. Let him that hath understanding count the number of the beast: for it is the number of a man; and his number is Six hundred threescore and six.

In essence, no one will be able to buy or sell except those that have the mark on their hand or forehead. It will be a total control of the world’s economy.

https://champex-immobilier.ch/ampex-lac_2/ Please note; we have to be clear about this. The Bible forecast this event two thousand years ago — events that are coming together in our day and age. The bible prophesied that there will be a one-world government controlling the economy of the world. This was preposterous, religious babbling until this day and age. Now we often hear calls for a one-world government and a one-world economy from many quarters.

So the prophesied one-world government is moving along, after which the Messiah shall return, to save us from ourselves.

One minister, Licenciado Benito Juárez (Campo Gobierno) Walid Shoebat, a Muslim-turned-Christian, has been preaching a message about the mark of the beast and has made many begin believing his unorthodox definition for the mark. But is he accurate?

Take a look at this video and see if you’re convinced.

He says, in essence, that the Greek phase for “666,” isn’t actually Greek, but Arabic. That’s interesting since the Arabic language didn’t come into being until the 6th century, AD, while John wrote the book of Revelation in the first century AD.

Shoebat alleges that the phrase translated by John in Revelation is not a number but a phrase, the bismullah, meaning in the name of Allah.

Below is the number “666,” as found in Shoebat’s favorite text, the Codex Vaticanus: 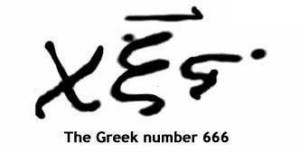 Those who support Shoebat present, as proof, this depiction of what “666” is in Arabic: 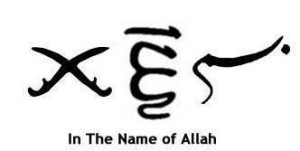 They look remarkably alike, don’t they? But this isn’t totally accurate. A more accurate, side-by-side rendering of the two images would be this one:

You will notice that defenders of Walid’s theory have to reverse the Xi letter and invert it 90 degrees to make it resemble the Arabic phrase.  Does that sound biblically sound — that God would present an image that is not quite the way some people interpret it?

To be fair, it doesn’t look so closely similar now, does it?

When you refer to an earlier version of the Bible, you’ll notice that the “666” are rendered in the Classical Greek and looks nothing like the Arabic now.

This is 666 as seen in the earliest text available: the Chester Beatty Biblical Papyri P47 dated the 3rd Century CE.

There is a line going across the top of the number “666.” That is to specify that this is a number, since the Greek alphabet also carried with it a numerical value.  To differentiate between letters and numbers, a line was drawn over the numbers involved.

Once again, the original Greek supports a number and not an Arabic phrase or any other phrase.

News2morrow still maintains that the mark of the beast is going to be a micro-chip that will be implanted into one’s skin, by which they can track you, monitor your purchases, catalog your medical history.

It’s so high-tech and so beneficial to mankind, but its claws are filled with poison from hell. Yet, there is already a common understanding among many that this will become the wave of the future.

WAVE OF THE FUTURE
For instance, pets are being equipped with microchips as a device to find lost pets, here.

A Swedish company has begun a practice of implanting their employees with a microchip in order to use the photocopier, open security doors and even pay for their lunch, here.

The irony is that many in the world will think this is a major advancement to mankind and will see no harm in allowing the chip to be implanted.

However, this implantation will be a “mark” of one’s obedience to the beast power that arises. We would strongly advise one and all not to receive the mark, no matter how logical it all sounds. Most of the world’s despots pushed through their agenda with nice-sounding trappings of progress and solutions, only to snare their prey.

Yet, just beyond that time, will the Messiah, the true God, the Lord Jesus Christ, return to bring down this one-world government, headed by satan, and dethrone him. Jesus will then usher a new government, as expressed in Isaiah:

For unto us a child is born, unto us a son is given: and the government shall be upon his shoulder: and his name shall be called Wonderful, Counsellor, The mighty God, The everlasting Father, The Prince of Peace. Of the increase of his government and peace there shall be no end, upon the throne of David, and upon his kingdom, to order it, and to establish it with judgment and with justice from henceforth even for ever. The zeal of the LORD of hosts will perform this. (Isa 9:6-7 KJV)