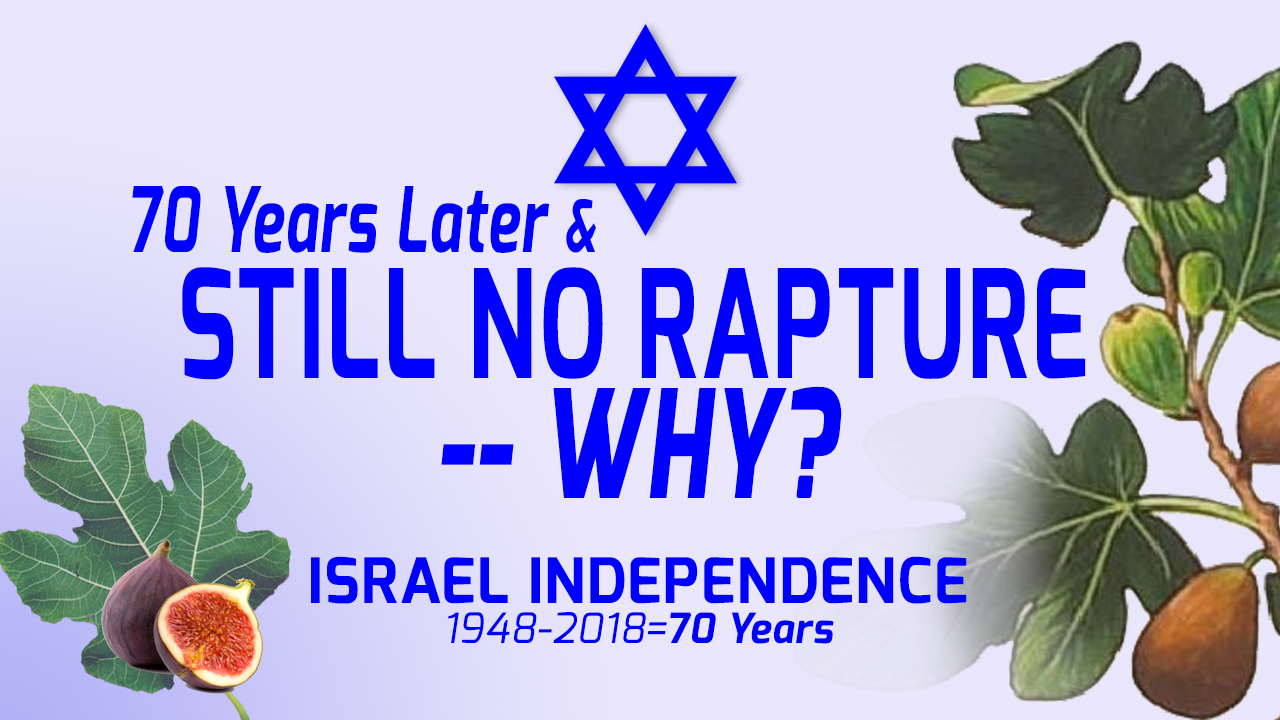 70 years after Israel became a nation and still no Rapture -- Why?

70 Years after Israel, Still no Rapture! — Why?

https://www.cvatrailblazers.org/members/steveh/activity/11598/ It was so perfectly worked out. As soon as Modern Israel became a nation on May 14, 1948, this became the start of the countdown to the return of Jesus Christ. Christians believed that that generation would not pass till all these things leading to His return be fulfilled. Meanwhile, the length of generations grew from 20 years, to 40, to 60 — and now that we’re at Phibun Mangsahan 70 years after Israel’s independence, there is still no rapture! Why? How were we misled? What can we learn from this?

If we don’t learn from our theological errors, we are bound to repeat them. Therefore we appeal to all Christians to reexamine what you’ve been taught about the end days before the return of Jesus Christ.

match commercial guy PLEASE NOTE: Yes, Jesus Christ is indeed returning back to earth as the Bible has said, but so much of what we’ve been taught about the last days is false and misleading. In this series of articles, we’re pinpointing the source of all our misunderstanding, our belief in a pre-tribulation rapture.

What was the source of our misunderstanding?

Jesus gave us the outline for His return in the famous Olivet Prophecy of Matthew 24, where He gave us the parable of the fig tree. Sometimes a fig tree is symbolic of Israel, sometimes it’s not. Christians have believed the fig tree in this scripture referred to the Modern State of Israel, after its independence in 1948:

Now learn a parable of the fig tree; When his branch is yet tender, and putteth forth leaves, ye know that summer is nigh: So likewise ye, when ye shall see all these things, know that it is near, even at the doors (Mt 24:32-33).

The view that the fig tree was a reference to Modern Israel was popularized by Hal Lindsey’s 1970 best seller, The Late Great Planet Earth. 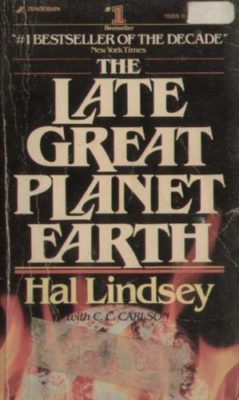 Lindsey declared on page 54 of his book, “What generation? Obviously, in context, the generation that would see the signs – chief among them the rebirth of the State of Israel. A generation in the Bible is something like forty years. If this is a correct deduction, then within forty years or so of 1948, all these things could take place.”

We will soon explain why chief among them the rebirth of the State of Israel was a terrible interpretation of Jesus’ words.

Nevertheless, this fig-tree-is-Israel assessment took on a life of its own so that as soon as 1988 came along, there was a great expectation of a pre-tribulation rapture to take place at that time.

Ed Weisenant came out with his 88 Reasons Why the Rapture Will be in 1988, but someway, somehow 88 reasons weren’t sufficient to make it happen.

But we believed it anyway.  So many disillusioned Christians were so distraught with Lindsey, for popularizing this concept, that Lindsey had to issue a correction of sorts on his website.

Yet no one ever seemed to go to Luke’s account of the Olivet Prophecy to find out that Jesus was not referring to the state of Israel at all.

Did Jesus say that the fig tree symbolized Modern Israel?

Behold the fig tree and all the trees! Was He singling out the fig tree? Of course not! And, by extension, He wasn’t referring to the Modern State of Israel! But we’ve been believing that for all this time!

Then what was Jesus saying? He was simply using the tree analogy to emphasize the speed in which all these things would come to pass, as quickly as seasons come and go. Continuing with this important verse, Jesus says:

This generation shall not pass, till all these things be fulfilled (Mt 24:34).

So if the Lord was not referring to Modern Israel as the fig tree, what generation was He talking about? And what is the catalyst for the Lord’s countdown for His return?

Yes, we’ve been misled on this and a number of important prophecies. Yet the Lord has given us precise instruction that will define the generation that will see all these things come to pass! It’ll not be 70 years duration, it’ll not be 40, and it’ll not be 20. It’ll be swift and catch many unawares.

The scriptures speak of the fulfillment of a seven year timeline leading to Christ’s return: it’s correct, it’s unchangeable — and, unfortunately, we’ve not been taught this. All of the prophecies that Jesus refers to will be fulfilled within those last seven years! So when Jesus says this generation shall not pass till all these things be fulfilled, He was referring to Daniel’s last seven years.

As we explain in our book, “Escape the Coming Antichrist — When the Pre-Tribulation Rapture Fails (and it will!),”  you must begin a study with Daniel’s 70 Week Prophecy, then tie together the Olivet Prophecy with the Seven Seals of Revelation, and then you will arrive at the generation that will see the return of Jesus.

(Please take advantage of this FREE PDF DOWNLOAD offer into the study of Daniel’s 70 Week Prophecy. When the disciples in Matthew 24 asked Jesus of the signs of His coming, He referred them to Daniel (Matt 24: 15)! You won’t be able to understand the timing of events without this knowledge. Daniel's 70 Week Prophecy -- Explained! (21976 downloads) )

What is the generation that will see all these things?

And he (Antichrist) shall confirm the covenant with many for one week (seven years): and in the midst of the week (after three and a half years) he shall cause the sacrifice and the oblation to cease (Dan 9:27).

Things to keep in mind:

When the Antichrist affirms this covenant in Jerusalem, this is the generation that will see the return of Jesus Christ.

This is the generation that shall see all these things!

Following is a chart showing the symmetry of Daniel’s Last Seven Years, with the Olivet Prophecy and the Seven Seals of Revelation. They all say the same thing.

Seven years! All these things will happen in seven years to the generation that sees the appearance of the Antichrist! Please don’t be misled anymore about the timing of end time events leading to Christ’s wonderful return.

In the meantime, rather than seeking the next rapture shuttle into outer space, seek to fulfill your calling on the earth now. Occupy the land. Advance the Kingdom of God. Heal the sick. Deliver the demonically oppressed. Stand up for truth, justice and righteousness in the land. Change culture and society as salt and light. We have much to do friends before Christ returns.

Therefore, as in all things, let us continue to prove all things and to rightly discern scripture.

The following video further explains the Last Seven Years and how all of scripture supports the view we’ve presented, including the timing of the Rapture.