Once again this year some YouTube sensation is setting the latest rapture date for the church. It seems that each and every year someone is setting a new date, as soon as the old date fails.

Amid this cacophony of confused voices, the Lord has been prompting me to write a book called, Accounted Worthy to Escape, with the subtitle, There is a Way of Escape — and it’s not the Rapture!

With so much focus on the rapture each year, News2morrow maintains that the church is squandering the precious time we have left. We seem to be so intent on escaping the world, that we are neglecting the work the Lord would have us do right here and now.

If you’re a regular reader of News2morrow, you will know that the church is about to embark on its finest hour! God is giving the church, right now, the tools needed to turn this world right side up, to make a difference in our communities, to stand for righteousness in an increasingly polluted world, to demand truth, justice and righteousness to arise in the land despite the obstacles of the giants in the land (Numbers 13:33).

Now is not the time to go anywhere!

The attached video is my first message from my upcoming book. I appeared along with Evangelist John Ramirez, who graciously invited me to appear with him on Shannon Davis’ radio program,  OmegaManRadio.

I go on to describe the necessity for the church to arise now for the needed work to be done, rather than to avoid the work and do nothing because Christ is coming anyway!

That excuse of doing nothing is a tactic of the enemy who would keep us in a continual state of immobility. I also go on to prove that the church will be on the earth at the time that the Antichrist is revealed, and that the saints will either be protected in the Great Tribulation or be martyred.

Not a popular message, but it’s the truth. There is a way of escape, but it’s not the rapture. Check out the program and see for yourself. 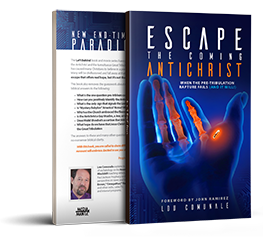 There are four ways to get your copy of my new book, now called “Escape the Coming Antichrist — When the Pre-Tribulation Rapture Fails (and it will!):

* You can buy a printed copy here at Amazon or order it at Barnes & Noble.

* You can order a Kindle version and have it immediately in your hands here.