Many have supposed that America cannot be found anywhere in the Bible. Actually, the words, “Russia” and “China” aren’t in the Bible either — and yet, many savvy biblical scholars know exactly where to find them in prophetic scriptures.

While you might not find the word “America” in the Word of God either, America is definitely featured prominently all throughout the prophetic scriptures. That’s because America is descended from ancient Biblical Israel — one of the lost ten tribes of Israel.

It is no accident that the United States of America began as a God-fearing nation, with its founders forming their constitution and laws around the Bible.

They had a semblance of God-ordained destiny upon them. Many pilgrims and puritans called themselves “the seed of Abraham,” “God’s Servants,” “His Chosen” and called this land “New Canaan Land,” and “The New Promised Land.”

John Winthrop, founder and first Governor of the Massachusetts Bay Colony, said, “We shall find that the God of Israel is among us, when ten of us will be able to resist a thousand of our enemies, when He shall make us a praise and glory, that men of succeeding plantations shall say, ‘The Lord make it like that of New England.’ For we must consider that we shall be as a City upon a Hill, the eyes of all people are upon us.”

The realization of this truth was also preached before a joint session of Congress in 1857. Rev F. E. Pitts so fascinated the gathering with compelling evidence that the United States is the “great Israel nation” to arise in the latter days and the “nation born at once” (Isaiah 66:8), that they asked him to return again the next day to expound further. Sadly, there is no record that this deep and reverent revelation made any lasting impression upon the governing body so as to awaken a nation to its legitimate ancestry and to national repentance. Regrettably, in just four short years the nation was nearly torn apart from the American Civil War.

This revelation that the United States was birthed in the mind of God as a result of the unconditional promises of God to Abraham should weigh very carefully in the mind of the reader. Because if we are one of the tribes of Israel in these latter days, it behooves us to undertake this knowledge with great sobriety and to realize the great faithfulness of our God, who has fulfilled His promises to Israel. And if He would fulfill His promises to Israel — promises that even thousands of years didn’t erase — wouldn’t He fulfill His promises made to you?

This is a compellingly exciting revelation to fathom, not the least of which is an understanding that not the slightest letter of God’s law will fall — but that all of God’s promises are “yes and amen” (II Cor 1:20).

Nations don’t just happen along. God divided the nations and set their boundaries, When the most High divided to the nations their inheritance, when he separated the sons of Adam, he set the bounds of the people according to the number of the children of Israel (Deut 32:8)

It says that the Lord set boundaries according to the number of the children of Israel. God knows who America is. Do we?

Understand that this knowledge opens the door to fully understand prophecy in the end days. It becomes a game-changer as to how we view the world, our role in it and God’s ultimate destiny for us.

This understanding sheds so much light on the nation that we live in and love. It explains the unmerited bounty of blessings bestowed upon us. It explains the power and the wealth given to this nation. It explains the Christian founding of this nation and it warns us — that like ancient Israel — we are in danger of a mighty fall from grace and dire consequences of our decades-long departing from God. 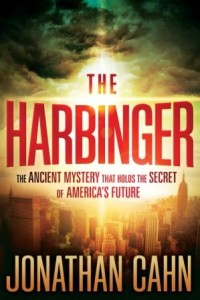 In the best-selling book, “The Harbinger” by Rabbi Jonathan Cahn, the author shows how there are definite similarities between ancient Israel’s rebellion from God and recent news events following the 9-11 tragedy.  At a time when the United States should have become awakened to God, Cahn chronicles how the U.S. is following the same pattern of rebellion — to pinpoint accuracy — that ancient Israel followed.

This is not a coincidence!

America is presently at a crossroads with competing political and cultural forces attempting to destroy the nation from within. We didn’t heed the truth of who we are as a nation at the time of the Civil War; truth if acted upon could have spared the nation from near destruction. Will we heed it today?

But how could this be? How in the world can you show that America is descended from ancient Israel?

It’s actually far easier to teach someone this vital truth than it is to undo years of misguided teaching about Israel and the scriptures.  So before we get to that point, we have to unlearn so much about what we think we know.

In the course of this teaching we will delve into the scriptures to find out that:

Then Rezin king of Syria and Pekah son of Remaliah king of Israel came up to Jerusalem to war: and they besieged Ahaz (the King of Judah), but could not overcome him.  (6)  At that time Rezin king of Syria recovered Elath to Syria, and drave the Jews from Elath: and the Syrians came to Elath, and dwelt there unto this day (II Kings 16:5-6).

It is indeed an irony — but all within God’s purposes and design. Two nations whose God was the Lord have each been blinded in different ways. On the one hand, the House of Judah, the Jews, rejected Jesus as their Messiah, and on the other hand, the House of Israel (though they were given the mandate for Christianizing the world — Therefore say I unto you, The kingdom of God shall be taken from you, and given to a nation bringing forth the fruits thereof, Mat 21:43 KJV) — they do not know they are Israel.

But they can know. The evidence is clearly before them — see the video above.