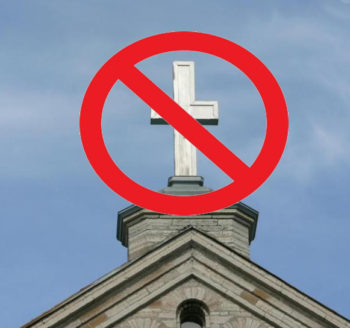 In the last seven years, corresponding with the administration of Barack Hussein Obama, we have seen according to a Pew research, the shrinking of the American population that identifies itself with Christianity.

This “fundamental transformation of America” is in no small part due to Obama’s constant harping against Christianity and his bend-over-backwards defense of Islam. Make no mistake: the presidency is like a door. What comes out of his mouth, for good or for evil, causes spiritual forces to bring it to pass.

THE BULLY PULPIT FOR GOOD OR BAD
When President Ronald Reagan, against the advice of his aides, spoke out against the Soviet Union and demanded that the Berlin Wall come down, both fell within his lifetime.

When President Obama started declaring his support for gay marriage, it opened up a door that pushed gay marriage into greater acceptance.

As an aside, to those of you who do not vote, does it matter who is in the White House and does it matter that you’ve abdicated your position to support the direction your country is going? Of course, it matters and America needs the involvement of moral-minded people like never before.

It is no secret that Obama has been openly vocal against Christianity and he uses his bully pulpit to diminish its importance. “We are no longer a Christian nation,” he boomed at one time. And he pushed his Obamacare health program that forces Christians to contribute to abortion operations that are clearly against their religion convictions, as well as against the first amendment, which grants religious organizations protection against intrusion of the federal government.

ASSAULT ON ALL SIDES
But by not means is the presidency solely responsible for America’s declining Christian population. Christianity is being assaulted on every front, from the ACLU and secularists who make it their unconstitutional goal to remove all vestiges of Christianity from every public square across America; to the educators of the land who promote anti-Christian and pro-Communist curriculum; to the entertainment media that not only attacks Christian morality but flaunts devil worship; to the Islamic Jihadists who attack and kill innocent non-Muslims for their beliefs.

The wave of lunacy is such in the land that when someone like Pamela Geller takes a stand against those who would attack free speech, she is viewed by the liberal media as the culprit and instigator. And people don’t realize that she is fighting on the first front in defense of free speech for all. She well knows that there is no amount of groveling that is going to appease those who want to impose Sharia on the land.

So, maybe Pamela Geller is right after all.

Then we have the gay rights front against Christianity, which attempts to force Christians into accepting gay marriage against their religious beliefs. The recent lawsuits aimed at Christian businesses that do not provide services to gay couples has produced a culture of hostility to Christianity.

Correctly the Holy Scriptures talk about a time when “good will be viewed as evil, and evil good” (Isaiah 5:20).

The anti-Christian rhetoric in the land has reached such a feverish point that presidential candidate Mike Huckabee says America is facing the “criminalization of Christianity.”

It is no small wonder that the attacks are increasing against Christianity. We are moving towards a growing persecution against Christians worldwide, which will crystallize into the time known in scriptures as the Great Tribulation. All of this will lead to the return of Jesus Christ, but before it does, the world will embrace an anti-Christian, one-world government, led by an antichrist.

Keep your eyes open in this pivotal hour; Jesus says to “watch and pray,” as you see developments leading to His return (Luke 21:36).