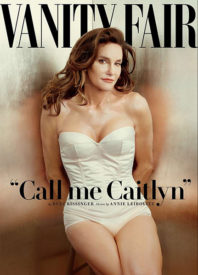 Bruce Jenner: Exposing More Than She Bargained For

The liberal world welcomed the news, calling her “courageous” and “brave” for coming out as “her true self.”  “She’s an inspiration for others,” was another common theme. One mindnumbing meme reflected, “When you come out of the post-op room, knowing you look better than your ex-wife…”

While the GLBQTIA (Gay, Lesbian, Bisexual, Transgender, Questioning, Intersexed and Ally) community embrace Caitlyn as one of their heroes (heroines, sorry!), her Vanity Fair cover actually exposes much more than her broad shoulders.  She exposes the lie that the GLBQTIA community have always upheld. By the way, GLBQTIA is an actual acronym — Google it!

So let’s put aside the religious and moral arguments for a moment — as valid and incontrovertible as they are — and let us solely address the lie that Caitlyn exposes.

The lie that gays are born that way is repudiated by science. More than eight recent major studies from around the world have shown that homosexuality is not a genetic condition.

But even so, from the standpoint of the LGBQTI community, doesn’t Bruce Jenner, having been born a man, violate his “true” core personhood by changing his gender? That’s like asking a gay person, who says he was born that way, to become heterosexual.

Thus the gay community cannot have it both ways. The truth is clear, if only America is willing to see the truth. Caitlyn Jenner exposed that lie to America.

But there are other lies to consider. The human race is trapped into problems of our own devising when we begin to believe a lie about ourselves. “You’ll never amount to anything,” keeps us tied to failure. “Nobody loves you,” holds us bound to loneliness and insecurity.

Most of our problems has as its root cause the believing of a lie. Jesus said, The truth shall make you free! How Jesus yearns to set all of humanity free of the lies we believe about ourselves.  Yes, even of the lie that homosexuals were born that way. It is that lie that keeps people in bondage.  But let Jesus break that bondage for you, by praying to Him for forgiveness for believing the lie and asking Him to make you new again.