News2morrow News & Prophetic Insights
CST
Home America Into The Fray – Christian, Now Is Not the Time To Rest Politically!

Into The Fray – Christian, Now Is Not the Time To Rest Politically!

inclusively Reflections on the Moments
baleka incontri lecce In Which We Live!
buy Lyrica online overnight Into The Fray – Christian, Now Is Not the Time To Rest Politically!

To many, including me, this last week has been the culmination of a long, heartfelt battle. The world has witnessed something that is not done in any other country…. The peaceful transition of power from one government to another, although, one would hardly consider it peaceful. Our nation’s Capitol has been besieged with thousands of people who seem to be railing against everything imaginable. God has brought us to a Kairos time in human history, for those who have eyes to see and ears to hear… God has done this!

He told us, everything that can be shaken, would be shaken. We are seeing that shaking and we are living in those days. God has to wake up His Church, so that it can be victorious in these last days. When things are easy, the Church sleeps… But when the earth starts to shake, people wake up. Well folks… NOW IS THE TIME TO WAKE UP.

We went through a tumultuous election process. God called it, and God intended it. We have been asleep while the enemy has sown ‘tares’ in our midst… governmentally, culturally, and in the Church itself. We have been like frogs in the pot, as they have turned up the water… and we were slowly being cooked alive. The Church turned in and went to sleep while paganism, idolatry and witchcraft has transformed our nation before our very eyes. Now we have to deal with Giants in the land. 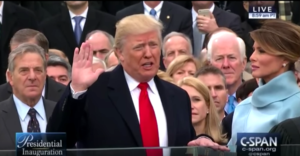 Donald J. Trump is sworn-in as the 45th President of the United States.

As much as many of you don’t want hear this… God has used Donald J. Trump to shake us up. We were on the brink of disaster, about to be consumed by the monster of Globalism. God sent us a Cyrus to fight the giants of politics, media, arts/entertainment, business/finance, education, and the family…. none of which the Church was equipped to take on. Over the decades, we have withdrawn to our Church culture thinking that we can rule our world from the ‘temple’ building. If you’ll notice, Jesus chased them out of the temple and forced them to take the land…. engagement!

Please note … all of those giants I mentioned above are currently in upheaval…. everyone of them. Lance Wallnau teaches us about the Seven Mountains of power that rule the world… The only one left out above is the Church, yet we are as divided as can be. Somebody had to be the heavy hitter. The evidence shows we could barely rally around Trump. BUT GOD IS IN ALL THESE THINGS THAT HAVE TAKEN PLACE. We, His people, are living in the modern Promised Land… and all we can see are GIANTS. Some are going to be left in the wilderness because of unbelief and inaction.

In the last days (and we are in those days) there will be Sheep nations… and Goat nations. The line has been drawn in the sand. God is separating Goats from Sheep… National governments cannot choose Christ… Individual people do that. That is a personal, individual choice. But, Governments can side with Israel or not. That is a political choice. God told us, He would make Jerusalem the stumbling stone, and that it is evident everyday. The whole world is and will continue to stumble over Jerusalem. They are the Goat nations! 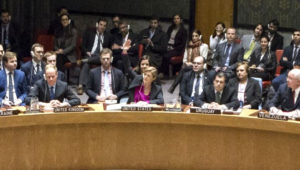 In the declining days of the Obama administration, President Barack Obama carried out a full-court press against Israeli settlements by pushing for this anti-Israel vote at the United Nations and then having U.S. Ambassador Samantha Power purposefully abstain, rather than veto the vote, thus overturning years of friendly US-Israeli relations. (1/7/17).

Over the years we have let our government lead our nation away from Christianity and Israel. Political Correctness has influenced the culture to be more anti-Judeo/Christian. Why is half the Church anti-Israel? Fewer Christians than ever have any heart for the nation of Israel or it’s people. Our nation was about to divide the Land of Israel, despite all the Biblical warnings against that. Unless Donald J. Trump took the Presidency, Hillary Clinton… and the Global elite establishment would have buried Israel. And, they were set to close the door on our religious freedoms. If God did not intervene, the last great Christian nation, would have been silenced. As Christians would have spent all our time trying to recoup and hold the line, rather than advance the Kingdom. Without a real Judeo/Christian United States, the world would have been lost. We are the Gatekeepers in this hour. We cannot fail. We must press forward.

Now we have this great opportunity to move forward again. It is obvious-the culture and all of its’ components are against us. Like Israel before us, we can take to battle and possess our land, or we can allow the pagan culture to overtake us. We must learn from both Biblical and modern History that as Christians we cannot be complacent. A church that is under a cultural rule will survive, but not like Church that Rules the culture. If we don’t begin to wake up and take our culture back the Giants will win, and many people may not make it into the Kingdom of God.

No… Donald Trump is not our Savior. But he has been anointed by God to open the door, to fight the battles we are not equipped to do as the Church. Remember who Cyrus was… He was not a Jew, but he recognized that God had called him for that hour to release the captive Jews. Because of his power he held back the enemies of Jews so they could re-build the wall and re-consecrate the temple. The Battle is now! We have just begun the work. Do not go back to sleep. We must rise up and take back every mountain of power. As Christians we are the game changers… Christians are the warriors… We must be engaged in Government… Business… Entertainment… Media… Education… and we must rebuild our Families! Do not quit! Winning the White House was just the beginning. We have not arrived… we have just entered the Fray. Look at the Giants and do not let them hinder you. If God be for us…. Who Can Be Against US!

Rev Brad Crook now lives in SW Florida. Together, he and his wife Nancy published The Christian Life-Times on both Long Island and SW Florida for over 16 years. Before leaving Long Island he founded and Pastored Kingdom Harvest Ministries in Selden. He left Long Island in 2006, retiring to his current Florida home. Over the years he has been active in the Body of Christ ministering the Word of God, in Churches and for many years in Jail ministry. God has used him restore the lost and broken through Christ. Led of the Lord to begin writing, again, he feels called use his writing gifts to bring clarity and unity to the Body Christ in these tumultuous last days.