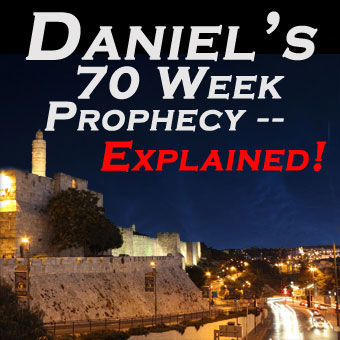 Daniel’s 70 Weeks Prophecy is Soon to be Fulfilled!

https://www.oldeenglishpestcontrol.com/3059-dte66694-what-best-online-dating-site.html Things were not supposed to be this way. Imagine your nation was chosen by God to be exceptional and a “beacon of light” to all other nations but suddenly it was reduced to third-world, poverty status. In fact, your whole nation has been ransacked, defeated and taken over by the Babylonian Empire.

The once great God-fearing nation is reduced to servitude to a Gentile, idol-worshipping power. The year was about 539 BC.  The nation was Judah. The prophet, trying to make sense of it all, was Daniel.

Daniel sought answers from the God he served, after coming upon some welcome news in an earlier prophecy by the prophet Jeremiah, who said that the Babylonian captivity would be for a period of 70 years.

For thus saith the LORD, That after seventy years be accomplished at Babylon I will visit you, and perform my good word toward you, in causing you to return to this place (Jer 29:10 KJV).

Daniel decided to seek the Lord in prayer about Judah’s future: but his prayer was interrupted by the archangel Gabriel.

methodically What we’re going to explain today is an important prophecy given to Daniel that not only proves the Messiahship of Jesus Christ but also spans millennia to reach into our pulsating present day with its ultimate prophetic fulfillment. For God’s answer is as relevant to the 21st century world as it was to Judah in the sixth century BC, in fact it’s even more so.

Gabriel’s interruption, which we will explain, is contained in four distinct scriptures, the first of which is:

peristaltically Seventy weeks are decreed as to your people and as to your holy city, to finish the transgression and to make an end of sins, and to make atonement for iniquity, and to bring in everlasting righteousness, and to seal up the vision and prophecy, and to anoint the Most Holy (Dan 9:24 MKJV).

Daniel was contemplating the end of 70 years captivity, but now Gabriel enlarges that 70. God uses a day-for-a-year principle in prophecy (Ezekiel 4:6). So what God is saying is that there will be another 70 x 7 year prophecy, which equals 490 years. 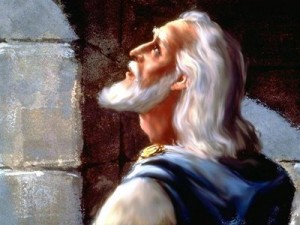 The book of Daniel is one of the most important prophetic books of the Bible. It chronicles several prophecies that span thousands of years, many of which have been fulfilled. But there are several prophecies that have been preserved for our day. God told Daniel that his book would be “closed up” until the time of the end — it would be “opened up” when it was most needed (Daniel 12:4). That’s today.

These prophetic 490 years are determined upon God’s people and upon Jerusalem, with the ultimate goal to:

Notice the emphasis on sin and God graciously offering an atonement. It was for sin and rebellion from God that Judah found itself in captivity. They had not learned of sin’s consequences from Israel, their sister nation to the north. For the sin of idolatry, Israel in the 8th century B.C. was conquered, ejected from their land and disappeared into the world — where they remain as lost tribes to this day.

The atonement for sin is certainly an allusion to the Messiah, who would also anoint the Most Holy Place by His very presence in the Temple, which would only take place in the prophesied reign of the Messiah upon His return.

But when does this span of time start? And where are we now in its fulfillment? And what does this have to do with today?

TIMING OF THE MESSIAH’S APPEARANCE

Know therefore and understand, that from the going out of the command to restore and to build Jerusalem, to Messiah the Prince, shall be seven weeks, and sixty-two weeks. The street shall be built again, and the wall, even in times of affliction (Dan 9:25 MKJV).

Here’s the answer. Gabriel says that the prophetic time begins when the decree is issued to rebuild Jerusalem and it ends when the Messiah appears. The time frame is going to be a total of 69 weeks, specifically 7 times 69, or a total of 483 years (based on Jewish and Babylonian calendars of a 360-day year that makes it 173,880 days).

So Jerusalem, though it was ransacked by the Babylonians and left in ruins, is going to be rebuilt!

Daniel was no way near Jerusalem! He was taken captive out of Judah and was now, due to God’s favor, in the royal court within the Babylonian government. So how would this occur and when?

We know it didn’t happen in Daniel’s lifetime. In fact, Daniel was 82 years old when the control of Jerusalem would be wrested from the Babylonian Empire by the overpowering Persian Empire in 621 B.C.

But it was during the Persian control of Jerusalem that God would raise up a man named Nehemiah, who conveniently enough was cup-bearer to King Artaxerxes. The cup-bearer would guard against poison in the king’s cup and was sometimes required to swallow the wine before serving it! This type of confidential relationship gave the cup-bearer great influence with the king. In Nehemiah 2:1-8, we read about the decree to rebuild Jerusalem:

And it came to pass in the month Nisan, in the twentieth year of Artaxerxes the king, when wine was before him, that I took up the wine, and gave it unto the king. Now I had not been beforetime sad in his presence. And the king said unto me, Why is thy countenance sad, seeing thou art not sick? this is nothing else but sorrow of heart. Then I was very sore afraid. And I said unto the king, Let the king live for ever: why should not my countenance be sad, when the city, the place of my fathers’ sepulchres, lieth waste, and the gates thereof are consumed with fire? Then the king said unto me, For what dost thou make request? So I prayed to the God of heaven. And I said unto the king, If it please the king, and if thy servant have found favour in thy sight, that thou wouldest send me unto Judah, unto the city of my fathers’ sepulchres, that I may build it. And the king said unto me, (the queen also sitting by him,) For how long shall thy journey be? and when wilt thou return? So it pleased the king to send me; and I set him a time. Moreover I said unto the king, If it please the king, let letters be given me to the governors beyond the river, that they may let me pass through till I come unto Judah; and a letter unto Asaph the keeper of the king’s forest, that he may give me timber to make beams for the gates of the castle which appertaineth to the house, and for the wall of the city, and for the house that I shall enter into. And the king granted me, according to the good hand of my God upon me (Nehemiah 2:1-8 RV).

Here we have the beginning date when the decree was issued. It was in the month of Nisan in the 20th year of Artaxerxes’ reign. When the day of the month is not given in Jewish chronologies, then it can be assumed that the first day is meant. Thus, the 1st of Nisan, in the 20th year of King Artaxerxes of Babylon corresponds to March 14, 445 BC (according to Khouse.org). 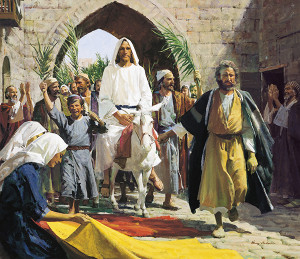 This was the only time that Jesus Christ would allow Himself to be praised as King. The occasion was His triumphant entry to Jerusalem before He was crucified in the Spring of 32 A.D., fulfilling Daniel’s 70 weeks prophecy about the Messiah’s appearance.

You tell me. Which Messianic figure was in the world at that time?

From the issuance of the decree to rebuild Jerusalem until the Messiah would be 483 years! That brings us right to the triumphant entry of Jesus Christ to Jerusalem just before His crucifixion for the world’s sins!

Incidentally, Daniel’s phrase “Messiah the Prince” in the King James translation is actually the Hebrew phrase, Meshiach Nagid, meaning “The Messiah the King.”

This sure fulfillment of prophecy to prove the validity of God’s word and the power of Almighty God in world affairs is an indictment against our educational system which has expelled both God and His word from students’ curriculum!

THE MESSIAH WOULD BE CRUCIFIED
The prophecy of Jesus continues:

And after sixty-two weeks Messiah shall be cut off, but not for Himself. And the people of the ruler who shall come shall destroy the city and the sanctuary. And the end of it shall be with the flood, and ruins are determined, until the end shall be war (Dan 9:26 MKJV).

Notice the accuracy of God’s word and the precision of its timing. Gabriel’s word to Daniel not only pinpointed the timing of the Messiah’s appearance, but now it also tells us that He would be crucified: Messiah shall be cut off, but not for Himself.

Of course, not for Himself means He died for the sins of the world. The Judeo-Christian theology of sin is real. The consequences of sin is evident all around us in this evil world we live in. But, the sacrifice for sins was paid in full by Jesus Christ.

It is never too late to turn to Him in humility and to ask Him to take away our sins so that we can have eternal life of joy and contentment with Him in the world to come. There is no other afterlife reality in heaven and hell except that which Jesus tells us is true.

Now the prophetic word continues: And the people of the ruler who shall come shall destroy the city and the sanctuary. Jerusalem would by this time be no longer ruled over by the Persians, but by Rome. And, sure enough, history shows that after the Crucifixion of Jesus Christ, Roman armies came into Jerusalem and sacked the city and destroyed the temple in 70 A.D.

Jesus warned his followers that destruction was coming to the temple (not one stone shall be upon another that shall not be cast down, Matthew 24:2) and to Jerusalem (O Jerusalem, Jerusalem, which killeth the prophets, and stoneth them that are sent unto her! how often would I have gathered thy children together, even as a hen gathereth her chickens under her wings, and ye would not! Behold, your house is left unto you desolate, Matthew 23:37-38 RV).

And the end of it shall be with the flood, recalls the biblical idiom using the word flood to denote marauding armies overrunning the land (Isaiah 28:1-2).

And, finally, ruins are determined, until the end shall be war. For many centuries, Jerusalem had been left in ruins and war was always surrounding it.

But that’s only 69 weeks? What happens to the “last week” of Daniel? When does that begin?

The last week outlined in “Daniel’s 70 Weeks” jumps us prophetically to our pulsating 21st century. This prophecy given to Daniel by the archangel Gabriel tells us what will be the news headlines to come.

Click here for the next installment detailing the Antichrist’s appearance and an easy-to-read chart that will be instrumental in understanding end-time events.