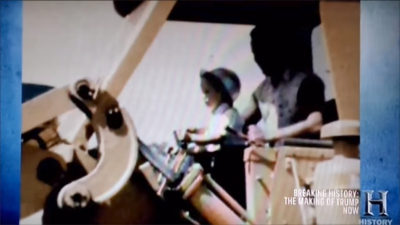 "When young Donald wants to spend time with his father, the boy visits construction sites. He's just five, he says, when he drives his first bulldozer."

That iconic image of young Donald at the helm of a bulldozer makes the recent Genoa News2morrow article on Donald Trump all the more intriguing.  That story featured a štítina gay seznamka Mindshift video called, “John Paul Jackson and President Donald Trump.” Mindshift host Lou Comunale interprets the “bulldozer” in the prophetic dream as Donald Trump cleaning up the political process once in the White House. (See video here.)

The above image is a frame grab from the first hour of a History Channel documentary called, “The Making of Trump” (synced here).  When describing Donald’s father who was at the time involved in New York construction, the announcer says, “When young Donald wants to spend time with his father, the boy visits construction sites.  He’s just five, he says, when he drives his first bulldozer.”

The imagery of young Donald Trump riding a bulldozer is either a great coincidence or a great foretelling of his destiny in the White House, in which he uses his own money for the presidential campaign and, by doing so, bulldozes the corruption surrounding Washington politics fueled by the mammon-grabbing, corrupt Washington establishment.