Donald Trump and the Sexual Accusers

http://fairchanceproject.com/programs/brush-of-kindness?share=facebook As Anita Hill failed, so will these Trump Accusers.

Satan, like the Democratic Party, only has one tool belt with a limited number of tools that he uses over and over again.

Whether these charges are true or not (Trump has denied them!), it is the same tactic used by the enemy to try to thwart God’s plans for the nation. We understand that America’s future is so dependent on the results of the 2016 presidential election. The nation either survives as a sovereign nation under Trump or it falls under the weight of the Hillary ideology of globalism, open borders, plummeting immorality and unchecked immigration.

The salacious attacks against Trump have recently become severe because they see that Trump definitely has a chance of winning, especially with the recent WikiLeaks document releases of incriminating behavior of Hillary and her campaign. This is why there is such a satanically inspired, coordinated attack against Trump by the Hillary campaign and the liberal media.

But can Trump withstand this attack?

To encourage those in our audience who hope for a Trump win, but think it’s faltering, let’s take a look at how satan was defeated using the same sexual harassment tactic against another man God was using. 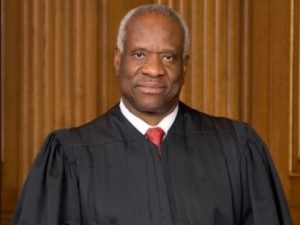 Clarence Thomas was the perfect choice for the Supreme Court because of his strong views on morality and the constitution.

He was perfect because he was a Conservative Christian, with deep moral values, and his very presence on the Supreme Court was a great threat to the liberal ideology that blacks had to be leftist democrats.

He defied the liberal orthodoxy that blacks couldn’t get ahead without affirmative action by bypassing it entirely. Instead, he came up through the ranks through tried and true American hard work, perseverance and brains.

He had to be stopped! — thought the liberal groups; otherwise the liberal agenda of racial politics would be undercut and rendered obsolete. Not only that but Thomas could threaten the overturn of Roe V Wade!

But how could he be stopped? 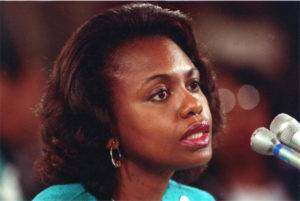 Anita Hill came out of the blue to tarnish a good man with unsubstantiated charges of sexual misconduct.

Enter Anita Hill; who in a last ditch attempt to thwart Thomas’ chances for the Supreme Court testified before the Confirmation Hearings with charges of inappropriate sexual advances, one of which involved a coke can.

Day after day, salacious charges in blaring headlines were heralded in the liberal press to destroy Thomas. It didn’t matter that Thomas was fully qualified to serve in the Supreme Court. All that mattered was that the Left was appalled over the charges of inappropriate sexual advances, charges that the liberals, with their hostility towards morality, don’t even consider inappropriate within their own circles.

Thomas stood his ground, rejecting her charges as fallacious. And, in the end, despite the terrible onslaught against the character of Clarence Thomas, he was confirmed as Supreme Court Justice.

By all accounts, this woman’s charges were unsubstantiated and deemed false. Yet, she was the embodiment of the liberal’s last gasp to stop a Christian conservative from overturning Roe V Wade and moving the nation towards embracing morality.

This is the same dilemma facing Donald Trump today. Trump has called for the overturn of Roe V Wade; Trump will defend Christians from Political Correct bias; Trump will protect the United States from elitists’ push towards a One World Government; he will defend Israel and make Jerusalem its capital, etc.

Trump is stirring up a demonic hornet’s nest by threatening to uncover corruption that is rife throughout the nation, political parties and the media. No wonder he has so many enemies. They want to retain their cushy positions of power as they try to manipulate the downfall of America.

So let’s not fall prey to the same ol’ tired tricks from satan. The democrat party will continue to bludgeon conservatives with charges of sexual assault because they know the Right still has a conscience, follows morality, and are still offended by things like that. Meanwhile, the Left is not offended by sexual impropriety at all. For decades the Left has defended sexual impropriety from JFK to Ted Kennedy to Bill Clinton, and even now defends gay marriage. Scripture says to not be ignorant of satan’s devices!

So, be encouraged friend. These attacks are nothing new. In the same way that Anita Hill failed trying to stop Clarence Thomas, so will Trump’s sexual accusers fail in their quest to thwart what God wants to do in America!