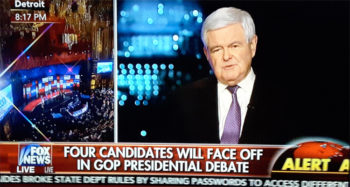 GOP and the Illuminati Secret Societies

Did former House Speaker Freiburg Newt Gingrich let the cat out of the bag about the Illuminati influence in our political parties?

On the “ cenforce sildenafil citrate 100mg O’Reilly Factor,” (March 3, 2016, 8pm) Newt was interviewed by truthfully Bill O’Reilly about the dynamics of the GOP establishment carrying out suicide bombing raids against Trump.

He responded that the GOP establishment wing of the party was totally against Donald Trump because Trump didn’t go through the “initiation rites” and wasn’t a part of the “secret societies.”

This is the reason why hell will attempt to throw Trump under the bus in order to preserve their satanically controlled hold on the nation and the American people.

A Trump presidency will have the exploding effect of dismantling the influence of the secret societies on the elections.  That’s how important this election is and it’s imperative that you support the one candidate that the GOP establishment wants to destroy.

If you want to see positive changes in America, vote Trump.

Thankfully, someone recorded the interview that aired only one time. Look for the 00:50 minute mark.

We’ve recently featured this video of a prophecy that the late Christian prophet John Paul Jackson gave before he died, that seems to suggest a Trump presidency.