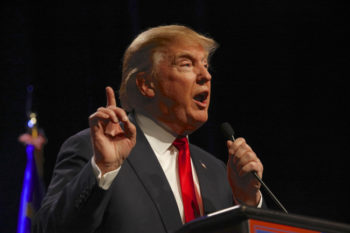 In Defense of a Christian’s Support for Trump

incontri trav napoli MANY WELL-MEANING CHRISTIANS are aghast at the prospect of other Christians voting for Bekalta Donald Trump for president. A year ago, I may have been one of those. No longer.

Friedrichsdorf POLITICAL REASON TO VOTE TRUMP
There was a time in America when the political parties were clearly defined with different agendas, giving Americans a choice in voting. All that has changed in the past few decades with the morphing of the political parties into shades of dark and darker. The parties may still declare that they are different — they are not. America has been witnessing the Democratic Left pushing America off the cliff of no return: culturally, morally, financially. And the Republican Right, which used to fight the Left, tooth and nail, to prevent the leftist’s agenda weakening America, is allowing the Left carte blanche in America’s demise.

For instance, the Left, led by President Obama, pushed for amnesty for illegal aliens (with the ultimate goal of creating instant democrats!), and the Right, while appearing to oppose the move, just sheepishly followed their lead.

Obama imposed Obamacare upon Americans, though it was clearly a violation of the Constitution (though the Supreme Court, later, worked some unethical legal gymnastics in order to permit Obamacare), the GOP made nary a squawk.

Then in-between elections, pushing for more votes, the GOP promised to do away with Obamacare when elected. But, again, the GOP refused to do anything about Obamacare once they were in power. The argument some are using is that people need it for affordable healthcare. But there are plenty of health coverage programmes out there like the IEHP for people who can’t afford healthcare and more importantly, don’t push up the premiums for the rest of us as much as Obamacare is thought to have done! We gave the GOP the control of the House and Senate, and what have they done for us in return?

In the midst of this breakdown of trust between the public and the political class, there arose Americans who were clearly concerned about the direction of the nation and they rose up spontaneously across the land to form the Tea Party. Instantly, Obama sensing the opposition growing against his agenda, crushed them in the form of IRS harassment which aborted their growing opposition movement. Meanwhile, the Right saw the dismantling of the Tea Party — and while the Tea Party was comprised of Conservatives, supposedly the core base of the Republican Party — they did nothing to stop Obama’s silencing of these Patriots.

And what of those horrendous Planned Parenthood videotapes that came out, showing how casually PP sold baby body parts. Once again, against glaring evidence to defund, Congress closed their eyes and did nothing. And, in fact, the democrats brought charges against the filmmakers!

So the fix is in — no matter which party you support, they are actively working against the American people!

The America public has grown wary of elected politicians who are more intent upon gaining power and money than doing what is right for the American people.

So why would Christians vote for Trump? Because we’re not naive to think that American politics is anything but a cesspool of corruption with money greasing the palms of politicians.

A man like Trump comes along, using his own wealth and is not enslaved to the money-grubbing political machine, is immune to the mammon that controls other politicians. He doesn’t have to do their bidding! He doesn’t owe anyone anything. So, of course, Christians can vote for someone like that — gladly.

Do we wish that he might be more “Christian” in his rhetoric? Maybe, but if he’s going to bulldoze Washington politics, he better be forceful and not a milquetoast-mannered, politically correct do-nothing candidate — we have too many of those already in Washington. We need someone to shake up the system.

We understand you would like to see a Christian in office. And, yes, so would we. But how many times have we seen “good, upstanding, moral” candidates elected into office who go to Washington, who in their naivete think they’re going to make great changes for the nation, and then we’re shocked! — they become changed, they fall under the ruling influence. They begin talking and acting like the ruling class, totally forgetting the principles that elected them, and they begin working contrary to the voters who supported them. And, this happens all the time!

There are reasons why that happens, and that brings us to the spiritual component.

SPIRITUAL REASON TO VOTE TRUMP
Christians understand there are spiritual forces operating behind the scenes in the world. That applies, of course, to Washington, D.C.

Dark, spiritual forces are at work in both political parties. And, those forces are operating with greater intent to bringing this nation down.

These are the underlying causes of America’s present condition. The party establishment of both parties have placed shackles on our nation that prevents America from rebounding morally, culturally, and financially. These government elites are empowered by unseen, satanic forces operating within them because they’ve submitted themselves to satanic rituals and secret societies.

Former House Speaker Newt Gingrich, surprisingly, fessed up and actually admitted the reason why Donald Trump is so loathed by the GOP establishment. In a recent O’Reilly Factor interview, Newt stated that Trump is not one of them, he didn’t go through the (Illuminati) initiation rites, nor does he belong to their secret societies. (See related article here.)

That admission — alone! — is sufficient to support Trump. If you want to support someone that is actually going to bulldoze the Washington establishment, then Trump is the man. There is no other candidate running for office that can do what Trump can do.

Trump is totally outside the controlling establishment and is not beholden to them, nor will he be pressured to submit to them. He’s not afraid of intimidation. You can’t outsmart him. He’s not PC, so you can say anything you want about him without him caring.

The donors that have influenced both parties to keep our borders wide open will have their heads returned to them on a platter, as Trump builds a wall.

These secret societies, in case you do not know, have influenced politics for decades and this entire system must be bulldozed to Kingdom come. The following video is from an Alex Jones program in which he confronted GOP Political Advisor David Gergen about his participation in a satanic ritual in the Bohemian Grove.

Radio show host Alex Jones got an exclusive interview with political adviser David Gergen about the satanic rituals that take place by our political leaders in attendance.

The fuel that keeps the political establishments operating is mammon. The word of God says, “the love of money is the root of all evil.” And that’s nowhere more apparent than in politics, from which many of the nation’s injustices originate.

That’s why the GOP establishment is resistant to Trump because he can’t be bought off. That’s why only a Trump presidency can bulldoze through the entrenched political machine and make decisions based on common sense and what protects Americans, not on party politics, donors, political correctness or any other nonsense.

If you think “only if a Christian was in the White House” things would be better. No. You can’t build a edifice on a corrupt foundation. The scriptures also cite, “you cannot put new wine in old wineskins.” You need to first remove the faulty foundation before you can build America anew.

If God can use Cyrus, a non-Israelite, to resist political oppression over the Jews and to, essentially, free them from captivity, God can use Trump to bulldoze the Washington establishment and free the Americans from political captivity.

Plus, his presidency overrides the political spirit because he’s not controlled by their money! (Personally, we feel that this act in the physical will actually “loose” in the spirit the transfer of wealth for God’s people for Kingdom end-time harvest work. But that’s another matter and another article.)

Can you now accept the premise that Christians who support Trump have valid reasons?