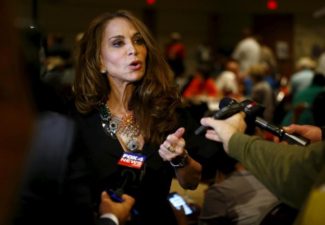 ISIS singles out Pamela Geller of Stop Islamization of America for revenge.

This was the whole point of what she was trying to say with the Mohammed cartoon contest, which resulted in two Islamic terrorists being shot dead in Texas last week.  We as a nation have capitulated to Sharia Law when we curtail our freedom of speech rights in order to comply with Sharia Law. The fact that many in the media — even some on Fox News — would discredit and blame Pamela over Islamic terrorists forcing others to comply with Sharia Law compounds the problem.

I would submit that we shouldn’t be going out of our way to offend anyone. But that’s not the point. The point is does anyone in America have the right to use force to shut you up and to force you to comply with their beliefs? Geller, along with Robert Spencer and others, is fighting on the first line of defense for all of us! Once this line is crossed, there will not be the resolve needed in America to keep Sharia Law proponents from picking out “offenses” and removing them one by one.

Maybe this death threat may turn the opinion of Bill O’Reilly around, when he sees how incongruous his stand is, siding with the intolerant terrorists who would kill Geller.