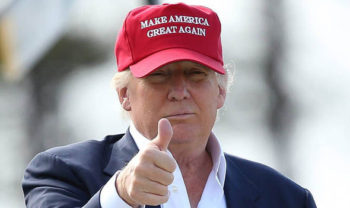 Donald Trump has a Godly anointing in his mouth. When he speaks, people listen. When he speaks, TV networks scramble to air his comments live. When he says we need to “build a wall,” suddenly there’s no more debate about it and all detractors get bulldozed by the sheer power of his words.

There is power in words. Jesus refers to this point when he urges us to speak to mountains till they come down.

Make no mistake! There is power in that declaration, and Trump like an old testament prophet is declaring to the nation and to unseen spiritual forces programmed to bring America down, that America is going to be great again!

This declaration is causing turmoil in the kingdom of darkness. You can easily see how disturbed the forces of darkness are. Everywhere you look — whether they come from the far left, George Soros, Bernie Sanders, moveon(dot)org, or even from the GOP establishment and the media — there is a shaking in the land, and Trump’s words are echoing in the nation from wall to wall.

Being an outsider, Trump is a real threat to the mammon-grabbing political establishments in Washington that are responsible for America’s political, social and economic downturn. Once Trump gets into the White House, there is no more business as usual by the mammon-infused elite, because he’s using his own money.

Symbolically, he overrides the obeisance to the corrupted mammon, that all other candidates must bow down to in order to get elected. This political mammon, energized by satanic forces, has fueled the corruption in the land, along with the corrosion of our morality and culture.  He avoids the worshiping of mammon, and thus is not physically nor spiritually controlled by the demonic political spirits.

Furthermore, the ONLY THING holding back the one world government IS a strong, independent America. That’s why satan is attempting to bring this nation down so fast. However, should a Trump presidency take hold, that acceleration downward would be stopped and the one world order will have to take a number before it can gain momentum again.

This phrase is not a just a hat slogan. It’s a God-inspired declaration for the land. And every Christian and patriot ought to support this phrase and movement. Why will America become great again? Because the upcoming American Awakening will make it great! We are declaring it when we say, make America great again! And the wind of the Holy Spirit will sweep across the land for a mighty harvest to the Lord, like never before.

See related story, here, on how a Trump presidency can bring about an American Awakening.

We need to pray for Trump. But look at the way he handled this threat on stage in Dayton, Ohio (3/12/16). The resolve this man portrayed at a time of grave danger tells us all we need to know about his character and how important it is to have someone of his caliber in the White House to make America great again!