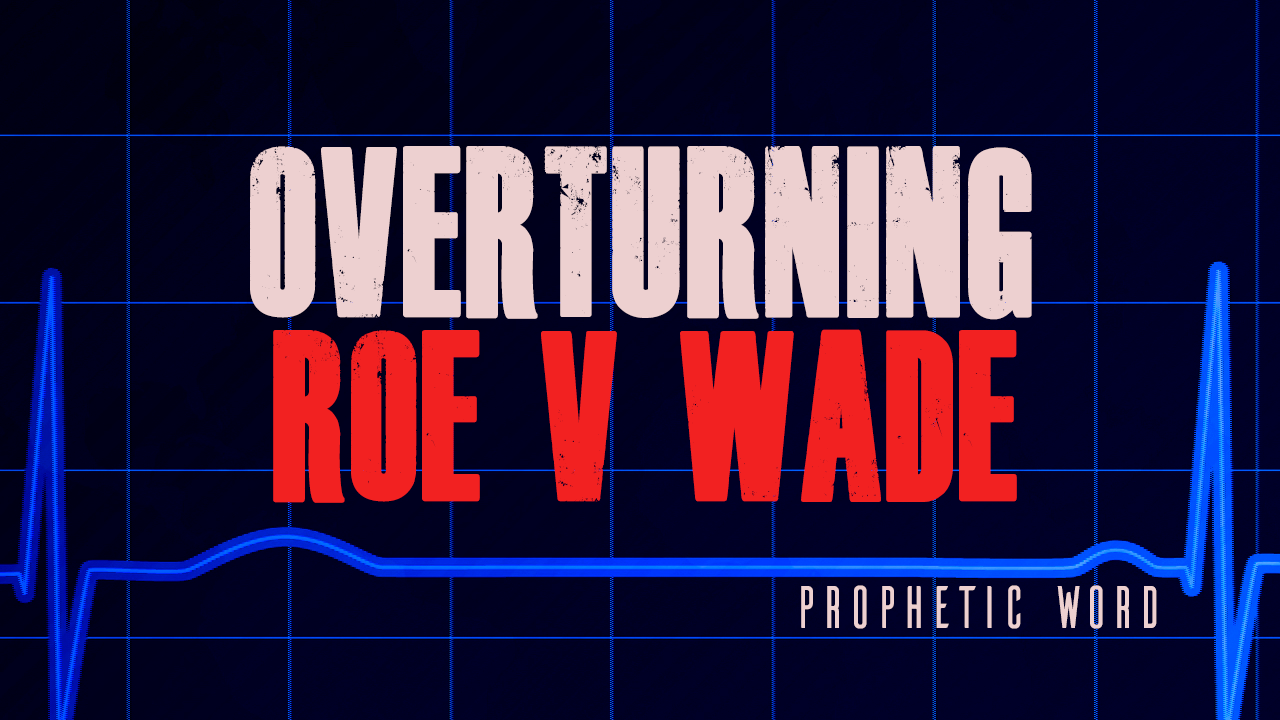 PROPHETIC WORD for the Overturning of Roe V Wade
— and Texas is Crucial!

Most of us watching the news today can clearly see that there is a supernatural warfare going over the destiny of this nation. Will we retain our Judeo-Christian heritage and legacy, or will we fall headlong into an abyss of immorality?

The Democrats have recently, and proudly, supported legislation that goes beyond abortion and into infanticide. As Virginia Governor Ralph Northam has contended — a woman can give birth and, while the baby is “comfortably” lying next to her alive, can decide to let it die.

But America is waking up to the brutality of abortion and the stage is being set for an overturn of Roe V Wade, the infamous 1973 abortion ruling.

President Donald Trump has already appointed two Supreme Court Justices, Neil Gorsuch and Brett Kavanaugh, and he is poised to add more. Many states, like New York and Virginia, are seeing the writing on the wall and have enacted legislation supporting late-term abortions.

But make no mistake: The U.S. is again undergoing a titanic spiritual struggle. And it all revolves around the very real potential of undoing the near fify-year-old, death culture on America imposed by the Supreme Court abortion ruling of Roe V Wade!

ABORTION’S HISTORY
Let’s put abortion is some kind of historical context. Since 1973, when abortion became legal, there have been over 60 million abortions! Did you realize that:

We’re talking about 60 million innocent lives lost! How many Billy Grahams, Jonah Salks, Albert Einsteins have been snuffed out?

TEXAS: THE KEY TO REVERSAL OF ROE V WADE
It’s time to revisit a 2006 prophetic word by Prophetic Revivalist Matt Sorger, for it pertains to today. The prophetic word about the overturn of Roe V Wade specifically addressed the fact that Texas was the key in the fulfillment of the word. In effect, as Texas was the center of the Roe V Wade debacle, Texas would also figure into the overturn of the ruling.

If you recall, Texas figures prominently in Roe V Wade. The original plaintiff in the case, Norma McCorvey (“Jane Roe”) filed her lawsuit in Texas after claiming she was raped and desiring an abortion.

A few years ago, Prophets Dutch Sheets and Chuck Pierce took a nationwide tour of the 50 states, seeking God’s divine plan for each state. The word for Texas, now get this, was that it was a prophetic state, and that the Lord’s purpose for Texas is this prophetic function.

So that is why Matt gave that 2006 prophetic word at a church service in Texas!

Now, let’s take a look at that prophetic word from Matt Sorger and let hope and faith arise to see the Overturn of Roe V Wade.

“So you guys are playing a key role here. And I believe spiritually, this is what I’m sensing right now. Spiritually, God has given you as inhabitants of this State the spiritual authority to decree a reversal of Roe v. Wade.“

“There’s something in the spiritual realm, that God is giving you the authority, that as you decree the reversal of Roe v. Wade, it will move the Hand of God. That will unlock not only the heart of Texas but the heart of this nation.

“There’s something connected between revival in America and Roe v. Wade; and you will see them happen simultaneously. You will see it happen. There will come a sweeping move of God that will begin to pump the heart of this nation again back towards God and at the same time, there’ll be life released even in the reversal of Roe v. Wade – and watch the Supreme Court!

“I knew God had destiny in Texas. I was just caught into an open vision while I stepped up to the pulpit, I was just caught up into an open vision. And I saw the body of America. And I saw the heart beginning to pump again. Just like when they take those defibrillators and they go pump! – and they electrocute the heart. God’s about to electrocute the heart of America.

[Decree with us! Even if you don’t live in Texas, join in with this decree!]


In this nation’s Declaration of Independence are these words: We hold these truths to be self-evident, that all men are created equal, that they are endowed by their Creator with certain unalienable Rights, that among these are Life, Liberty and the pursuit of Happiness.

…Among these are LIFE!