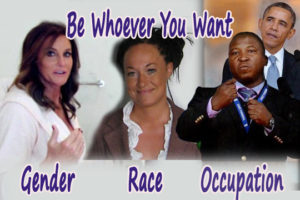 As political correct dogma continues to shift the marker of ‘truth’ further and further away from absolutes, it’s getting harder and harder to rationalize its apparent contradictions.

Here we have two sociological anomalies. purchase prednisone Bruce Jenner, a famous male athlete who decides he’s really a woman, and has surgery to become Caitlyn. click here to investigate Rachel Dolezal, a white woman who says she’s a black woman, and becomes the head of a local chapter of the NAACP. 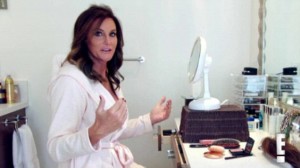 Caitlyn Jenner learning the art of makeup in her identity.

On the one hand, transgenderism is embraced as normal. And everyone should accept the new Bruce Jenner. And anyone who disputes her new image is branded a hate-monger. 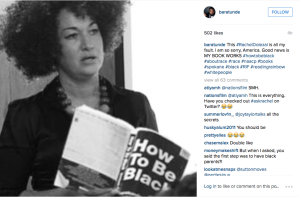 This is Rachel Dolezal actually reading up on “How To Be Black” by comedian Baratunde Thurston.

On the other hand, transracialism is rejected as a lie. This New York Daily News article explains how Rachel accomplished her “lie.” Even the NAACP had to classify her claims as a lie. Whether they keep her or not as Spokane chapter head, the group affirms her “whiteness” when they say, in a press statement: “One’s racial identity is not a qualifying criteria or disqualifying standard for NAACP leadership.”

Bingo! Do yo see the double standard?  If the NAACP used the same standard that was used for Caitlyn, we would have to accept Rachel as black because she says so.

Thus the PC gods are contradictory in their weak defenses of distortions and mis-truths of their own making. 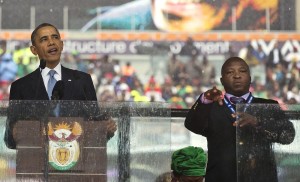 And what of that wannabe interpreter madcap who sign-interpreted for President Barack Obama during the Nelson Mandela funeral? Once again, if we had to follow the Caitlyn PC ecstasy of acceptance, we’d have to conclude that he was a real interpreter too.