Simple Prayer Strategy for America at the Crossroads

http://pebama.cz/337-dtcz27979-lochovice-gay-seznamka.html News2morrow has long stated that there presently is a titanic spiritual war over the destiny of the United States, and it’s evident by the growing divide in the nation on every front. Now comes a prophetic word that substantiates this claim and offers a simple prayer on how to defeat the enemy seeking to destroy the United States. 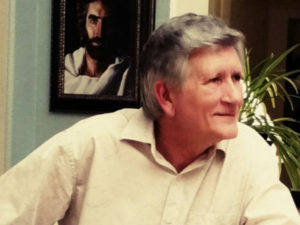 Prophetic voice Castle Rock Mike Thompson, who has been featured in News2morrow here and here, with prophecies about GOP presidential candidate Donald Trump, was given a third vision on July 2nd, 2016.

In this vision, he was looking down at the map of the United States and there were these two Sumo-type wrestlers waging war over the fate of the United States, for power and influence over it. They were neither Japanese, nor were they representative of any human opposing teams,  whether Trump and Hillary Clinton, black and white, Christian and non-Christian.

The angel in Thompson’s vision reassured him with these words: “God is sending a spirit of faith and encouragement to strengthen the wrestling man who is aligned with the Holy Spirit and God’s plan for America.”

The angel then gave Thompson these scriptures for reassurance:

JOSHUA 1:9 (NLT)
This is my command—be strong and courageous! Do not be afraid or discouraged. For the LORD your God is with you wherever you go.

EPHESIANS 6:10 (NLT)
Be strong in the Lord and in his mighty power.

The angel then said, “Just like David strengthened himself in the Lord (I Samuel 30), I will teach Christians how to strengthen themselves in the power of the Lord.”

Our father in heaven,
Hallowed be your name,
Thy kingdom come,
Thy will be done IN THE UNITED STATES OF AMERICA,
As it is in heaven.
Give us this day our daily bread,
And forgive us our debts,
As we forgive our debtors,
And lead us not into temptation,
But deliver us from evil,
For yours is the Kingdom and the Power and the Glory,
Amen.

Can you imagine the power God is giving you — right now! — to help fulfill God’s perfect plan for America, by simply opening your mouth and repeating daily this heartfelt, simple, yet powerful, prayer?

Let it be so! Please share this prayer and let God’s will prevail over America!