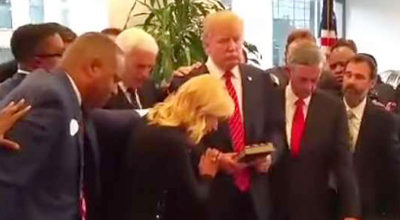 Never before in American history have we witnessed a more blatant example of the spiritual war for America’s destiny as it’s exemplified behind the scenes in the present 2016 presidential elections.

It is a contest pitting the entrenched political parties, energized by the spirit behind the initiation rites and secret societies that Gbongan Newt Gingrich has confessed to (see recent horní planá gay seznamka News2morrow article here), and the one we believe God is using to destroy the darkness going on in Washington politics — Tupiza Donald Trump.

Say what you will about Donald Trump — he’s crass, belligerent, proud — we believe that God will use those very same characteristics in Trump to “bulldoze” through the Washington establishment that has been aligned with satanic activity and has been loathe to relinquish its power and wealth to anyone outside their satanic fraternity.  (See Mindshift video on Donald Trump here.)

God isn’t going to use a meek, milquetoast candidate to do the work of demolition.

With Newt’s recent disclosure that Trump is opposed by the GOP wing of the party because he has not been inducted into ‘initiation rites’ and the ‘secret societies’ in Washington, we believe that Trump will have a ‘bulls-eye’ on him by the forces of darkness.

THEREFORE, we are proposing a prayer movement for Trump for the months leading to the election.

We would encourage all American patriots, Christians and intercessors to join us for an hour of prayer for Trump this Saturday morning at 10 am, est.

We’re determining whether we should do this either weekly, bi-weekly, or monthly.  Let us know your comments below.

We further believe that once Trump becomes president, it will dethrone spiritual forces operating in Washington and allow for the prophesied transfer of wealth for the American Spiritual Awakening.

Christians don’t get so desensitized by the political process and the growing moral depravity in the land. Get involved and join us as we pray. Don’t let satan’s spirit be the only one that fills the vacuum we leave by not praying.