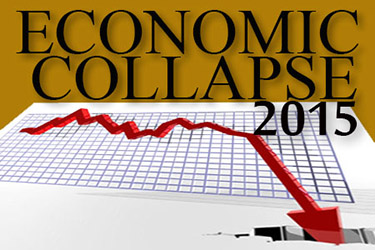 Prepare for the Economic Shaking

There is a rising chorus of prophetic and secular voices presenting the same ominous future for America at this time. It is imperative that the reader begins to analyze the words spoken and to begin making preparations to sustain the economic collapse predicted for Autumn 2015.

There are economists’ voices already sounding the alarm to America and presenting warnings of economic downturn based on their own compelling economic data, though they may not pinpoint Autumn 2015 as the specific time of reckoning. This article, however, will focus on what Christian prophets are saying. They do pinpoint Autumn 2015 as an economic downturn for the nation, and offer sound advice on how to prepare, in a way that secular voices cannot.

The purpose of this article is twofold:
1) to those who already sense something terrible is coming to America, this will offer some clear advice on how to prepare in both a physical and spiritual manner;
2) to those who do not believe in the prophecies pointing to the return of Jesus Christ, we suggest that you take note of this word —

if you see a significant economic collapse coming to America this year, then you need to be accept that other prophecies for America will also come to pass, including growing race riots, harrowing natural disasters, the decline of America, and the probability of MARTIAL LAW coming to America in 2016 with the suspension of the presidential elections.

Evidently, God is giving us clear warnings. We had better heed. It is a time for national repentance. Our nation was founded on Godly principles, but we’ve rejected Him in recent decades and embraced every evil in our culture, making good evil and evil good. Yet, for all that, there is a reckoning coming. But even if the nation doesn’t turn to God at this time, you as an individual can.

All you need to do is to ask Jesus to forgive you of all your sins and to accept Him as your Lord and Savior. Then ask Him to fill you with His Spirit so that you can follow righteousness and not your own fleshly desires.

1 – Rabbi Jonathan Cahn may be the most familiar prophetic voice, having written two books The Harbinger, which detailed biblical prophecies surrounding the 9-11 tragedy, and The Mystery of the Shemitah, which explains the biblical pattern which indicates a financial collapse for 2015.

Cahn describes, in this video interview with Infowars, the seven year cycles that Israel followed and how it applies to America. Historical information about the Shemitah can be found here.

Cahn explains how the Shemitah can be a blessing to a nation that follows God or a judgment for the nation that doesn’t. The Shemitah year began on Sept. 25, 2014, and will hit its climax on Sept. 13, 2015, which will then be followed by the year of Jubilee, or the year of release.

2 – Mena Lee Grebin, who was interviewed by news2morrow here and here, received visions from the Lord about the upcoming economic disaster, in which she recommends food stockpiling. She also foresees martial law coming to the nation and very difficult days ahead for us all, which will lead to the return of Jesus.

She appeared with Rick Wiles’ TruNews where she detailed a number of prophecies for America, and those videos are here.

3 – Rebecca Sterling had some amazing prophecies given to her by the Lord, pertaining to our economic collapse, Barack Obama’s election, election fraud, EMP (electromagnetic pulse) attacks, FEMA, race riots, and martial law.

4 – Terry Bennett, a prophetic minister based in Kansas City, MO, received an angelic visitation giving him details about the turbulent days to come. He received the vision before the 2008 economic collapse, having been forewarned of its coming. He expects another one to occur in 2015, following the same seven year pattern that Cahn is following.

He sees three sets of seven years. After the economic collapse this year, he foresees governmental destabilization within the next seven years, then a global call for a world religion in the following seven years. Unfortunately, it won’t be the true religion; it’ll just be the one that breeds the antichrist after which the Lord returns.

5 – Michael Snyder, author and economist, speaking on the Prophecy Club, gives an overview of the economic indicators pointing to a stock market crash with the resultant busting of the burgeoning debt bubble this fall. If you own stock, he offers practical advice on what to do. So, be prepared. His advice might be good to take on board if you’re someone who uses online stock trading services to make your investments, especially in a volatile market; you’ll want to do plenty of reading around the subject to help direct your decisions.

News2morrow presents this for the purpose of awakening people to what is coming to the land and to be prepared for the return of Jesus Christ. Ultimately the ground is being laid out before us that we will have to choose between two opposing forces: that of the antichrist (whose is probably on the earth today) and Jesus Christ.

The choice you make will have eternal consequences. Make the right choice.