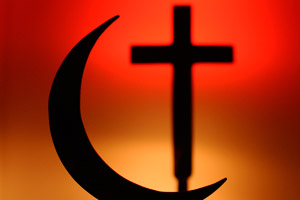 The Chrislam of Eschatology

honorifically The dangerous and confusing times we live in demand that there will be an increasing interest into the study of end-time events; for it is the only rational answer that explains what is going on.

http://impresagiorgi.com/2159-dtit26444-bakeca-cagliari-donne.html Yet, there is a curious phenomenon taking place among Christian circles. Despite Christ’s repeated warning of not being deceived, there are many Christians comparing notes between the Bible and the Koran, Christianity and Islam about eschatology (end time events).

We’ve already seen a mixture of Christianity and Islam forming in some churches, calling it “Chrislam” — and we’ve been warned against it. So, why would we embrace Chrislam eschatology?

The two religions are diametrically opposed to one another and the joining of their doctrines can be nothing short of catastrophic to the truth.

The apostle Paul exhorts Christians to not embrace any other gospel (Galatians 1:8).  He also tells us that light shouldn’t have fellowship with darkness (2 Cor 6:14).

Christ repeatedly told us that there would be great deception in the last days. So why would Christians compare what God says in His word to what Allah says in his?