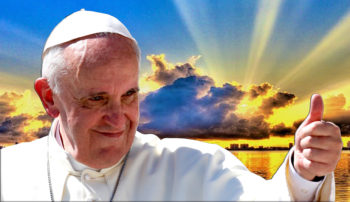 The Pope of Miracles? A Look Ahead…

Is it possible that the world’s champion of climate change could have power over the weather too? Well, according to the liberal press, miracles surrounded Pope Francis’ visit to the United States: Rainbows appeared in the sky! A colorful sunrise welcomed the Pope! 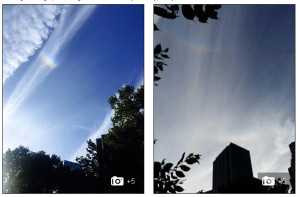 The Daily Mail Online heralded the “dozens of ‘rainbows’ seen in Central Park as people waited for the Pope.”

Fox News’ Shepard Smith even found it interesting that New York should have already been in the throes of Autumn, but for the Pope’s visit summer is still with us and the trees are still green.

The Pope seems to have transcended the media’s disdain and abhorrence of Christianity and its followers in the public square with wall to wall television coverage of his trip. In fact, the secular press has catapulted him to superhuman status, much like what they did in 2008 to President Barack Obama.

The press’ adulation of the Pope and his alleged power over the elements brings us to an interesting question. Suppose if this Pope actually did have power over the weather? Suppose he really was able to perform bona fide miracles? Would you follow him? Would you conclude that God was responsible for his miracles?

The Book of Revelation refers to a time just ahead of us when someone called the “false prophet” will actually perform miracles before the world. He will also promote the antichrist that will soon arise and the world will follow them both.

And he (the false prophet) doeth great wonders, so that he maketh fire come down from heaven on the earth in the sight of men, And deceiveth them that dwell on the earth by the means of those miracles which he had power to do … (Rev 13:13-14 KJV). 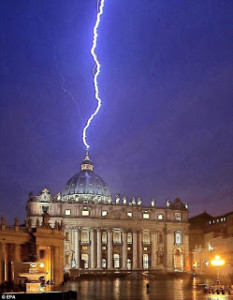 If you follow along in that chapter, you’ll note that it is these miracles that seem to compel the world to submit to the antichrist’s demands that everyone have a mark (microchip) in their right hand or forehead to control all aspects of a new global economy. God warns against submitting to this mark! Therefore it’s imperative for you to discern what is going on in the news today.

Which brings us to this question: how do you think the press will view the antichrist and the false prophet? Don’t you think that they will be marshaling the world’s affections toward them, astonished that “fire comes down from heaven” at their bidding, proclaiming that even nature conforms to their will, and compelling the world to follow them? Of course, they will.

However, miracles, of and by themselves, do not affirm that God is responsible for them. The Holy Bible relates a story in which the miracles of Moses were duplicated by the sorcerers of Egypt — the same miracles! (Exodus 7).  Therefore miracles do not affirm anything. Satan performs what appears to be miracles as well.

That scripture is a parallel to a future, end-time supernatural contest between God’s true servants and Satan’s (Revelation 11). But only the true servants’ miracles come from God.

How many people will fall for the false miracles of the end-time prophet? Therefore, take heed. Jesus’ first comment when His disciples asked about the signs of His coming was don’t be deceived by false Christs and false prophets (Matthew 24:4-5).

We are actually living in biblical times as we see events taking place in the news that were prophesied by the scriptures that foreshadow the return of Jesus Christ.

Therefore, Jesus would say, watch and pray that you may be accounted worthy to escape all these things that shall come to pass and to stand before Jesus Christ at His return! (Luke 21:36).

Resources:
The heavens smile down on Pope Francis: Dozens of ‘rainbows’ appear above New York as huge crowds flock to see the Pontiff
http://www.dailymail.co.uk/news/article-3249593/The-heavens-smile-Pope-Francis-Dozens-rainbows-appear-New-York-huge-crowds-flock-Pontiff.html