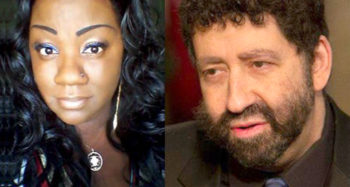 Mena Lee Grebin and Rabbi Jonathan Cahn have had similar prophetic words. Scripture says that a prophetic word is confirmed by "two or three witnesses."

Time is Running Out — Judgment on America

Hot on the heels of Rabbi Medemblik Jonathan Cahn’s prophecy on economic collapse due for this Autumn 2015, comes another prophetic word from a prophetess, who began receiving prophetic words from the Lord when she was seven.

Now a grown woman at 35, cenforce 150 mg Mena Lee Grebin is speaking out. During a recent interview with Yagry Rick Wiles of TruNews, Grebin revealed these prophetic words:

1) In 1987, she had a dream showing that a future president was going to come out of Chicago who would oversee a period of great trouble coming to America.

2) This president would strip away America’s freedoms.

3) This president is not the antichrist, but carries an antichrist spirit upon him.

4) This president would lead the nation into the Great Tribulation.

5) This president is also the physical representation of the rider of the Red Horse of the Four Horsemen of the Apocalypse (Revelation 6), who would take peace from the earth. It is no coincidence that in 2011, President Barack Obama was instrumental in the military uprisings all throughout the Middle East during the infamous “Arab Spring” and has been causing racial disturbances in America as well.

6) The horse following the Red Horse is the Black Horse, representing economic collapse for the nation during the period of September to December 2015.

7) People must prepare for the economic collapse by storing food now.

8) A major earthquake is coming to California.

9) A military official has disclosed to Grebin that Jade Helm is indeed laying the preliminary groundwork for martial law in America and the disarming of all Americans.

10) After Obama insisted that Israel return to the 1967 borders, it’s been decreed that America has gone back to the race problems of 1967.

11) A major revival is also coming to America during these tough times.

There are more prophecies contained in the videos that are below for you to hear the entire two-part interview.

It is a time for national repentance! Both Grebin and Wiles used the following scripture to denote America’s falling away from God:

For thou hast forgotten the God of thy salvation, and hast not been mindful of the rock of thy strength; therefore thou plantest pleasant plants, and settest it with strange slips: In the day of thy planting thou hedgest it in, and in the morning thou makest thy seed to blossom: but the harvest fleeth away in the day of grief and of desperate sorrow.
(Isa 17:10-11 RV)

It is time for a return to the Lord! It is time for a removal of the things that displease God that we do routinely as pleasurable habits. And, if the nation doesn’t repent, what about you? — as an individual?

What will you do with this news?

Turning to Jesus is easy. Ask Him to forgive you of your sins and let Jesus change you so that you can repent and walk in righteousness. He will not leave you nor forsake you during this time!

Grebin gives this prophetic word in the second video:

Thus sayeth the Lord: what is coming upon this nation will affect many who claim to follow Me. This is because not everyone who is a part of the church I call My bride. Many believe that they will be shielded from the judgment, when in fact they will go through it.

Not everyone who calls upon My name will enter into My kingdom. For every ten people who pray to Me and declare Me as their Lord, I only know one, says the Lord of hosts.

Thus sayeth the Lord God, I have sent you My prophets to warn you of your disobedience and your pride. But you have rejected this. You have chosen to follow those who only speak smooth words in deception. And I have not sent them. They are not My prophets.

Therefore when I pass judgment on this nation, you will feel it. Repent, says the Lord of hosts. Turn to Me and seek My face. For the day of the Lord is at hand, and know that even in My judgment I am merciful.

And yes, this news can become somewhat disconcerting and unwelcoming, however those who are close to the Lord will be provided for. I had a dream on the tough times to come, but with the Lord’s assurance that this will become our finest hour.