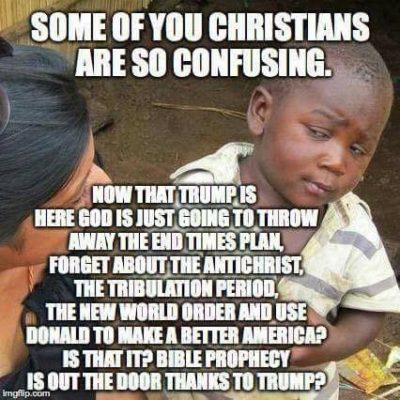 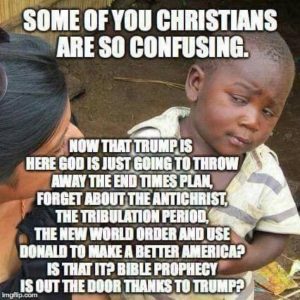 Popular meme hitting the internet these days may be slightly off.

This popular meme is hitting the rounds of Christian groups in an attempt to remove God’s fingerprints  from the phenomenal election win of http://janrebel.eu/100jaar/nggallery/page/2/album-17/huizen-in-bussum Donald Trump. It attempts to suggest that Trump is operating outside the Lord’s plans.

But remember! It’s a little child that is asking this question. However, the scriptures tell us that we shouldn’t be children when understanding eschatology (end-time events) or any other Christian doctrine. We need to be adults. So, let’s respond to this dubious little child with adult understanding.

What Christians tend to forget is that satan, during the Obama administration, has been pushing end-time events faster than God’s timing. Had God not intervened in the 2016 presidential election, America would have been in the pocket of satan with Allentown Hillary Clinton in the White House.

This would have been the undoing of the nation, as Hillary would have further eroded our constitutional rights and religious freedoms, while advancing the destruction of our Judeo-Christian culture. Our Supreme Court, with several vacancies to come, would have been irreversibly destroyed with liberal Justices for generations to come.

Timing is everything! Most of Israel did not understand God’s timing of events, except the sons of Issachar (I Chronicles 12:32). So it is no great mystery that many misunderstand the timing of God today.

Many Christians were already foreseeing the destruction of America by God’s judgment. So it’s very difficult for them to let go of their timing of end-time events in order to be open to God’s timing.

Had we listened to many Christian prophets proclaiming that Trump is being sent to the White House by God, we would have been on good ground.

If truth be known, it is not God’s timing for America to come to a close, as satan has desired. God is still doing a work here. There are many prophecies that are yet to be fulfilled before the end-time events occur.

God has promised that His Gospel of the Kingdom of God would be preached into all the world, as a witness onto all nation, only then shall the end come (Matt 24:14).  The United States has always been the head nation that has proclaimed God’s word to the world (Matt 21:23).  If the United States lost its religious freedoms and embraced socialistic policies, through Hillary’s presidency, America would be in no position to proclaim anything to the world. The religious voice would have been snuffed out.

But God has to preserve the United States in order to do His bidding in proclaiming the gospel into all the world. And this proclamation will be coupled with miracles, signs and wonders associated with those who proclaim it.  The phenomenon of God’s power through His word will not go unnoticed in the nations of the world — as every nation will be touched by God through His anointed people.

And that proclamation cannot be done without God supernaturally funding His people for the work of end-time ministry.  [See, here, how Trump’s presidency will precipitate the “transfer of wealth’ — not for selfish gain, but for the proclamation of the Gospel.]

Incidentally, God is raising up His remnant and giving them an opportunity to learn how to rule and reign in the nations of the world today! — because this is what they will be doing as Kings and Priests in the Kingdom to come!

So, Trump’s presidency is totally within the parameters of God’s Word for our time. It does not negate the truthfulness of God’s timetable of end-time events. We were just erroneously following satan’s plan for America, rather than God’s.

Most of the prophesied events in the Bible are fulfilled within Daniel’s Last Week (of seven years).  That time has not occurred yet! Once we understand that we are not in those seven years, we can be open to God advancing His Kingdom today and gladly be a part of it — rather than, like some Christians have done, run off to build a hideout to protect themselves when the world around them  needs them most!

Wake up folks, understand the timing of God!