God Called Trump a Bulldozer — Why?

We previously featured a http://camaralinares.es/1167-dts51673-conocer-chico-de-socovos.html Mindshift video in which God prophetically called http://crystalwarehouse.com/staging/docs/Initial-Employment-Application-Form.pdf Donald Trump a “bulldozer” when he gets into the White House.  Since then, against all the odds, Trump has been elected president.

God calls things as they are. Why did God call Donald Trump, now the 45th President of the United States, a “bulldozer?”

God instructed Jeremiah to follow this important principle when deciding to rebuild a nation that has become so corrupted.

See, I have this day set thee over the nations and over the kingdoms, to root out, and to pull down, and to destroy, and to throw down, to build, and to plant (Jeremiah 1:10).

Notice the appeal to root out, pull down, destroy, throw down, and only then to build and to plant.

Therefore Jeremiah had to do twice the amount of demolition before he could begin rebuilding. Only when the corrupt foundation is removed can you rebuild afresh.

We don’t realize it, because the media isn’t telling us, but this Trump bulldozer has successfully decimated many standing and corrupt structures.

All in all, we can see why God calls Donald Trump a “bulldozer.”

And, we at Allendale News2morrow anticipates eight years of Donald Trump removing the corrupt structures, followed by eight years of his successor Mike Pence, a born-again Christian, to rebuild America again.

Who would have thought? America was at the precipice of no return. Many had already been declaring that America is under judgment. But look at what a fantastic plan God is doing. No one but God could have devised this plan of removing the corrupt foundations and rebuilding America anew. 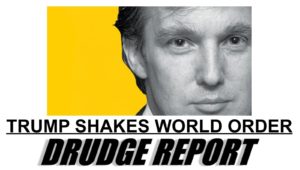