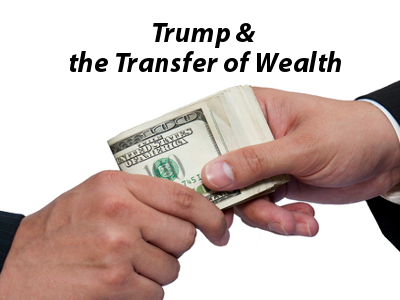 Trump and the Transfer of Wealth

Trump & the Transfer of Wealth

THERE ARE STRONG INDICATIONS that the long awaited transfer of wealth will be initiated by a Donald Trump presidency!

Sort of the reverse of what socialist billionaire George Soros presently does for evil, funding billions of dollars to destroy nations and populations. These end-time gospel entrepreneurs will benefit the world.

There are two major unprecedented events occurring presently that suggest that the transfer of wealth is on the way.

Let us set the stage for this first point.

Throughout the Holy Scriptures there are countless examples of prophets performing symbolic actions, as an act of faith, before the prophecy is made manifest in the natural. Abraham was told to count the stars and, later, the sand on the seashore, for the amount of which would be the sum of his descendants. Abraham was urged to slay his son Isaac in a direct comparison of Father God laying His own son, Jesus, down at the cross. Ezekiel had to act out the siege of Jerusalem before it happened. And, in the New Testament, Agabus the Prophet met Paul at Caesarea and warned him of coming sufferings, by binding his hands and feet with his girdle and saying, So shall the Jews at Jerusalem bind the man that owns this girdle, and will deliver him into the hands of the Gentiles (Acts 21:11-12).

Now Donald Trump, though he may not realize it, is performing a symbolic prophetic act that no other candidate in American history has ever done before. rencontre gay lesbienne He has funded his own presidential campaign.

That means that he is not bought out by the special interests, the lobbyists, and the globalists that fund every political campaign in America.  That means that he does not get in bed with the mammon-controlling entity known as politics. That means when he gets to Washington he won’t be told what he can and can’t do. He’s not controlled by money. Money is not his god.

MAMMON IS A GOD

Jesus says No servant can serve two masters: for either he will hate the one, and love the other; or else he will hold to the one, and despise the other. Ye cannot serve God and mammon. (Luke 16:13).

How many times have we voted in righteous candidates into office and then when they get to Washington they become a different person? They are no longer holding to the ideals that got them into office. They’ve been bought off because they’ve bowed the knee to the mammon that controls their every move in politics.

https://lucashigino.com.br/2622-dtpt27036-já-sei-namorar-marisa-monte.html Think of the symbolism of this prophetic act. Donald Trump becomes the president of the United States without genuflecting to the god of mammon, which controls the whole political process in Washington. He thus bypasses and rejects satan’s initiation rites to come under his control. That puts him above satan’s monetary grasp and makes him steward over the nation’s wealth.

Trump symbolically, yet effectively, trumps satan’s hold over the nation’s money! Therefore, we at News2morrow believe that the prophesied transfer of wealth can occur during his administration. And, we will be praying into that!

2 — THE CHURCH DIVORCES THE GOVERNMENT

In another unprecedented move by Trump, he has stated that, when elected president, he will take the chains off the churches of America by repealing the 501c3 mandate which prevents Christian leaders from speaking out publicly about their political beliefs. [See the antichristian history of the 501c3 here! See how Trump will help Christians here!]

Here’s a brief history of the 501c3. Since taxation began in this country, churches have been tax exempt, taking the example of the Levitical priesthood in the scriptures. But in the early 1950s, Senator Lyndon Baines Johnson was opposed by religious groups. Once he came into power, he never forgot the Christian opposition and vengefully tacked an amendment to a bill, coupling the tax exemption with a new condition that religious groups refrain from politics.

This was satan muzzling the church! And the church went along with it.

It’s not too surprising that once the church was muzzled, satan began his attack at the very foundations of our nation. School prayer, bibles and religious teachings were soon expelled from American schools. Youth crime rates skyrocketed in the nation, as students rebelled against the moral fabric of America.

And the church stood silently by.

What most people do not realize is that the 501c3 was a contract with the devil. The church affirmed that they would accept tax exemptions in exchange for their silence on all things political. Jesus said, You cannot serve God and mammon!

What made this so much worse for the church is that they willingly went along with restrictions on their preaching — even though they already had the tax exemption!

And this is the very reason why the church has been impotent to overcome the social evils of the land. With all of our prayer movements for generations, why are Christians still struggling to make a dent in the abortion battle, for instance?

We submit it’s because the church has bonded itself with the political operations of satanic governmental decrees, and Jesus says, satan cannot oust satan.

Until the church removes its shackles from the government, it does not have the authority and power to enact favorable changes in the culture of the nation.

We’ve laid out the two main reasons we expect God to move favorably in our nation, specifically when dealing with the release of Kingdom wealth.  We haven’t heard anyone else saying this, so we ask that you present this material before the Lord and pray about it.

Pray for the transfer of wealth to be enacted. We’ve presented a plausible scenario that indicates this is coming.

We hope that a new generation of righteous patriots can arise with fervor, praying to be a part of Kingdom wealth distribution for the preaching of the Gospel in mighty signs and wonders and for the saving of the lost in this great worldwide Awakening to come.