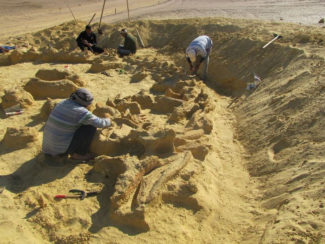 Yet in all of the news reports of this startling, archaeological find, the whale in the room, laid bare for the world to see, is glaringly un-reported. Just how did whales get buried in the desert?

If modern news reporting gave credence to the Bible as a historical book, they would have no doubt come to the conclusion that the biblical narrative of a flood that enveloped the whole world has played a role here.

It’s instructive for us today to recall just why God allowed the flood to consume all life from the planet at the time.  And GOD saw that the wickedness of man was great in the earth, and that every imagination of the thoughts of his heart was only evil continually (Gen 6:5 KJV).

Kind of sounds like the days we’re living in today, doesn’t it?

Jesus affirms the reality of the flood when He said, For just like the days of Noah were, so the coming of the Son of Man will be. For in those days before the flood, people were eating and drinking, marrying and giving in marriage, until the day Noah entered the ark. And they knew nothing until the flood came and took them all away. It will be the same at the coming of the Son of Man (Mat 24:37-39 NET).

In essence, the scriptures show that sin would be pervasive across the earth and that the world’s people were only concerned about their own selves — until destruction came.

In another place, Jesus likens His return as a “thief in the night” (2 Peter 3:10).  Many will be totally unprepared for the day of reckoning with the One who created them. But you don’t have to be unprepared. The signs of His return are all around us — especially as we see the toppling of the United States as a world superpower, and the rise of the antichrist spirit across the Middle East and the world.

There are many signs of His return. Continue reading news2morrow for more details.