News2morrow News & Prophetic Insights
CST
Home America What If There Was No U.S.A.? 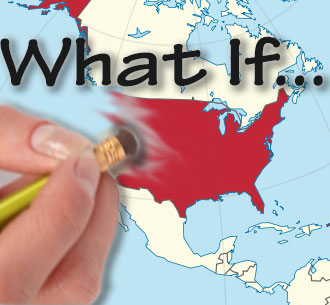 http://map.unipe.edu.ar/2181-dts39403-donde-conocer-gente-villanueva-de-alcardete.html There is presently an unprecedented attack upon every aspect of traditional America: its morals, its founding, its culture. Every day we are witnessing an unceasing assault upon this nation, as if the anti-America forces are intentionally attempting to degrade, diminish and demoralize America and its values.

Our schools, through their hostile-to-America curriculum, are guaranteeing that generations of future Americans will continue to hold contempt for this nation, once revered as “the city on a hill” and the “great melting pot.”

unhandsomely Benjamin Franklin warned us that we needed to fight against the destructive forces set out to destroy the Republic. We are now at that point in America.

But let’s imagine if the anti-American forces got their way and completely devolved America to an insignificant nation.  In fact, let’s take a look at what the world would lose if there was no America.

http://pebama.cz/173-dtcz80655-gay-seznamka-skuhrov-nad-bělou.html FREEDOM AND RIGHTS
The founding of America brought with it an unparalleled form of government which guaranteed individual liberties, God-ordained rights and protection from a tyrannical government. It was a government unlike any other. It was a government composed of the people — not kings or despots — by the people and for the people.

So important was this concept in our founding nation that the first words in the the U.S. Constitution were We the people!

We hold these truths to be self-evident, that all men are created equal, that they are endowed by their Creator with certain unalienable Rights, that among these are Life, Liberty and the pursuit of Happiness. (The Declaration of Independence)

Our founding fathers purposefully created three branches of government, as a form of checks and balances, that would prevent tyrannical leaders from controlling the masses.

All nations on the earth understood that America was, indeed, “the shining city on a hill,” and for centuries they left their own countries to embrace the freedoms that we’ve originated here. The nation has been a beacon of hope and light for all the oppressed in the world.

To secure these rights for all people — including black slaves — America became the only nation that fought a civil war against its own citizens to grant liberty and freedom to all.

Ironically, today we the people are losing out to a oppressively growing government that is virtually controlling every aspect of our lives, with no end in sight. Why that is happening will be detailed later.

MORAL STANDARDS
America set a standard of morality based on Judeo-Christian values. Despite the fact that presently our nation’s values are under assault, it was these values — and none other — that set us apart from other nations. It was these moral standards that set the tone and character for our fledgling republic and preserved the nation for centuries to come, until secularism began eating away at our DNA. 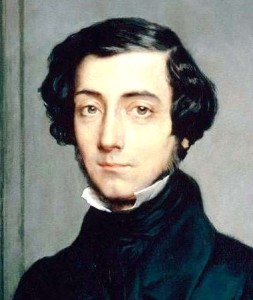 French philosopher Alexis de Tocqueville marveled over the religious aspects of the American people, affirming that it was this characteristic that made this nation “exceptional.”

French philosopher Alexis de Tocqueville was astonished at    the rapid growth of America and sought to find out why                 America was so different from other nations.  He wrote about       his findings in a volume entitled, Democracy in America.

Without it, the national experiment would fail:

“Our constitution was made only for a moral and religious people. It is wholly inadequate to the government of any other.” — John Adams, founding father.

“…it is religion and morality alone which can establish the principles upon which freedom can securely stand. The only foundation of a free constitution is pure virtue.” — John Adams, founding father.

And we as a nation are finding out that as good as our Constitution and checks and balances are, they are useless when the Executive, Judicial and Congressional branches lose their virtue and become  corrupted.

To be more precise, the American experiment prospered because the nation was God-birthed, as John Winthrop and his fellow pilgrims covenanted with God to create a nation modeled after “Christian Charity,” which would indeed be blessed by the Almighty God — and it has! 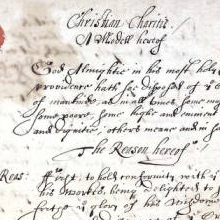 John Winthrop’s famous speech, “A Model of Christian Charity,” was written while en route to the “new land” and it laid out the groundwork for a national covenant between God and the Pilgrims. One of the famous phrases from the speech was “we shall be as a City upon a Hill, the eyes of all people are upon us.”

The covenant that John Winthrop expressed in his famous speech, “A Model of Christian Charity,” seemed to be based on Moses’ proclamation in Deuteronomy 28, in which there would be national blessings for obedience and curses for disobedience.

And who can deny that the United States of America has been blessed in ways unlike any other country on the face of the earth?

NATIONAL BLESSINGS
Our rich agricultural resources have not only provided sustenance to our own people, but like Joseph of the Old Testament [see here for reasons for this startling comparison], America has for generations been the breadbasket of the world.

“The fear of the Lord is the beginning of wisdom and knowledge” says scripture (Proverbs 1:7, Psalms 111:10) and that became evident all throughout American history. America led the world in most of the modern advancements we take for granted today.

America brought the world out of its 18th century backwardness to the rapid, pulsating 20th century with a proliferation of inventions and advancements in science, medicine, technology, business, communications, entertainment, and you name it! The United States was and is second to none in philanthropic work to the world’s poor.

More than any other nation, the city on a hill has produced more Christian missionaries for the world, has given more humanitarian aide to beleaguered nations,  has been a long-lasting beacon of freedom and light to the world’s lost, has saved the world in two world wars and has unselfishly built up vanquished aggressor nations after the wars.

Yes, imagine that there was no America.

Yet, many today are seeking to destroy the very foundations of America in their constant fragmenting of America along racial and ethnic groups, and economic and social classes.

IS THE SUN RISING OR SETTING?
Decades of self-inflicted wounds by rejecting our Judeo-Christian heritage has taken its toll.  Alas, the great nation seems to be showing signs of aging. Its population seems to have grown weary of the republic, having taken for granted the freedoms and liberties we’ve so richly enjoyed over the centuries by our Creator. They’ve instead been on a campaign to denigrate America’s rich history. Its leader seeks to “lead the world from behind.” The morally traditional America family is under severe assault from within, with no let up in sight. 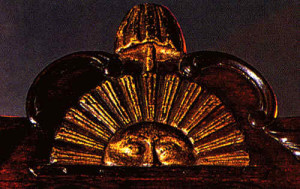 As Abraham Lincoln remarked, “America will never be destroyed from the outside. If we falter and lose our freedoms, it will be because we destroyed ourselves.”

There’s a story that at the beginning of our nation’s founding, there was an engraving of the sun, which represented the fledgling republic, upon President George Washington’s chair.  Benjamin Franklin couldn’t tell if it was a rising sun or a setting sun, but ultimately decided that it was a rising sun — and he was right.

With the nation’s numerous internal forces arrayed against itself today, many wonder if it’s now a setting sun.

AMERICA’S LAST GREAT FUNCTION
We’ve seen how God has blessed this nation throughout our history, but now we’re seeing that our national problems seem to be escalating out of control. Of course, our growing problems are in direct correlation to our removing God from everyday life.

The anti-American forces operating with increased regularity within our society are doing a greater disservice to the world than they realize. For once America’s sun sets, you remove the sole nation that is preventing the One World Government from coming into existence.

This One World Government has not only been prophesied by the Bible thousands of years ago, it is also being promoted by many government leaders in the world today.

For as long as America remains a superpower and continues to be the policeman of the world, the Biblical prophecy of the One World Government, headed by the Antichrist, cannot appear.

It is a spiritual conspiracy to topple the United States to usher in the Antichrist and his global domination of all nations.

Yes, imagine that there was no America.