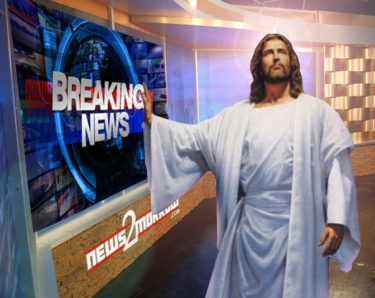 What Would Jesus Report?

What would the news be like if https://immo2000gestion.com/2382-dtf61215-rencontres-gratuites-et-sans-inscription.html Jesus Christ was reporting it? Suppose if He was on http://www.marisqueiralareiraportuguesa.pt/index.php CNN or MSNBC tonight? Would He discuss the upcoming presidential elections? Global warming? Relations between the U.S. and Israel? The moral decay in America?

No doubt if Fox News’ Megyn Kelly got the interview of the century with Jesus Christ on her program, He would discuss the one issue that has been on His heart and mind for the past two thousand years. Unlike the news of this day, it would be “good news,” a message of hope and glad tidings. He would present a case for the failure of all human governments in eradicating deception, corruption, famine and wars, and offer the one solution that would remove these lingering, systemic problems from mankind.

It would be the very same message that He preached two thousand years ago, and that He charged His disciples to “broadcast” throughout the world.

The word, broadcast, actually derives from the farmer’s act of casting seed across the field in a broad, sweeping gesture. We now use it to denote the dissemination of news, entertainment and information through the airwaves. So, it’s quite appropriate for the gospel of Jesus Christ to be broadcast over the airwaves, so that the seed of His word can produce a harvest.

That message is important because Jesus said that this very same message that He preached two thousand years ago – the gospel of the Kingdom — would again be preached “into all the world,” just before His return (Matthew 24:14)!

That seems to suggest that His message really hasn’t been preached for thousands of years, or at least has not reached the ends of the earth. So then, what is that teaching that will herald His return?


Today, let’s take a look at that message and see why it’s more welcoming news than all that the United Nations and all that our brilliant minds have been able to muster.

Let’s take the global initiative first. But before we do, in order to find out what His message is, we have to first understand the Messenger! Who was Jesus?

KING OF THE WORLD
Pontius Pilate, the Roman ruler who had jurisdiction over Judea, wanted to know who Jesus was as well. “Are you the king of the Jews?” Pilate demanded.

The truth that Jesus is outlying here is that He came into the world to be its King, to rule over all the nations. But He said, it’s “not of this world,” that is, not at this time. It’s when He returns again as King of Kings and Lord of Lords, .

KINGDOM OF GOD IN TWO PHASES
There are two distinct phases of the Kingdom of God. It is in the here and now, and it’s also in the future.

Let’s look at the future one first.

In one of His Kingdom parables, Jesus describes Himself as a “nobleman” who went into a “far country to receive for Himself a Kingdom and to return” (Luke 19:11-12). While He was gone He expected His servants to “occupy” until He returns and to attend to His business.

Upon His return, yielding authority as King, this is what His Kingdom will be like:

RULERS WITH HIM
We spoke earlier about Jesus being the King of kings and the Lord of Lords. That means that there will be other kings and other lords ruling with Him. Who are these rulers?

Jesus speaks about a bodily resurrection of all the saints from this life. And they, having overcome in this life, will have responsibilities as rulers with Him in His Kingdom.

Jesus says that Abraham, Isaac and Jacob will be in the Kingdom (Matthew 8:11). David, who ruled as King over Israel in his life, will be resurrected and continue his rule, under Jesus, over Israel (“And my servant David shall be king over them; and they all shall have one shepherd: they shall also walk in my judgments, and observe my statutes, and do them” (Eze 37:24 RV).

His apostles will each be resurrected and rule with Jesus, over each of the twelve tribes of Israel (“Peter said to Him, Behold, we have forsaken all and have followed You. Therefore what shall we have? And Jesus said to them, Truly I say to you that you who have followed Me, in the (Kingdom), when the Son of Man shall sit in the throne of His glory, you also shall sit on twelve thrones, judging the twelve tribes of Israel (Mat 19:27-28 MKJV).

That invitation by Christ to rule with Him is made to all who would follow Him in this life! Jesus is inviting you to be a part of that wonderful Kingdom that will replace all the world’s kingdoms.

In the above parable, where Jesus told his followers to “occupy” till He returned, here’s the followup.

IT’S A FAMILY BUSINESS
To each of His servants, He gave them a “talent.” In a similar parable in Luke 19, He gives them a “pound.” In both instances, they denote something of monetary value, which Jesus expected them to “gain by trading” – doing business, returning a profit. This is all a business venture. Jesus, being the CEO, expects His workers to help build the family business while He’s away.

What will we do with the “truth” that He gives us?

A certain nobleman went into a far country to receive for himself a kingdom, and to return. And he called his ten servants, and delivered them ten pounds, and said unto them, Occupy till I come. But his citizens hated him, and sent a message after him, saying, We will not have this man to reign over us.

And it came to pass, that when he was returned, having received the kingdom, then he commanded these servants to be called unto him, to whom he had given the money, that he might know how much every man had gained by trading. Then came the first, saying, Lord, thy pound hath gained ten pounds. And he said unto him, Well, thou good servant: because thou hast been faithful in a very little, have thou authority over ten cities. And the second came, saying, Lord, thy pound hath gained five pounds.  And he said likewise to him, Be thou also over five cities (Luke 19:12-19).

Notice: to each one of these servants, who helped build the Kingdom of God in this life, they were rewarded with positions of rulership over cities in the future Kingdom of God.

Other scriptures confirm this:

It is imperative to understand that when His disciples asked Jesus about signs of His coming, He stated emphatically,  “And this gospel of the kingdom shall be preached in all the world for a witness unto all nations; and then shall the end come” (Mat 24:14 KJV).

We at news2morrow have been stressing the point that news events taking place today all attest to the fact that Jesus is coming soon. The preaching of the Kingdom of God will become all the more pronounced as we draw closer to the time of His return.

KINGDOM NOW!
But there’s more to the story of the Kingdom of God. If Jesus was on The O’Reilly Factor, Jesus would say, in a way that even Bill O’Reilly couldn’t refute, that the Kingdom is in the future, but it’s also for the here and now.

When the Pharisees, who were the religious leaders at the time, demanded to know from Jesus when the Kingdom of God should come, “He answered them and said, The kingdom of God cometh not with observation: Neither shall they say, Lo here! or, lo there! for, behold, the kingdom of God is within you” (Luke 17:20-21 KJV).

We’ll take that up in our next installment. So, come back for the answer.